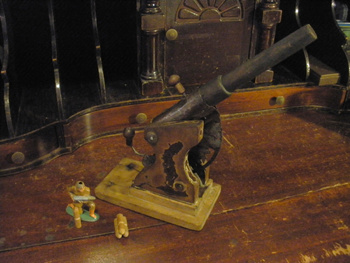 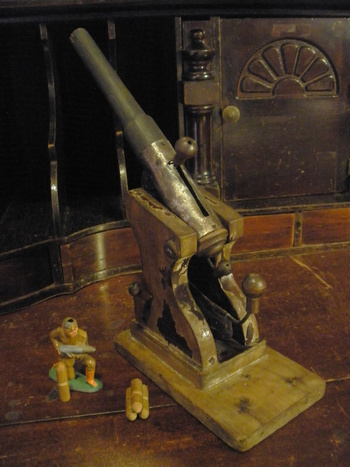 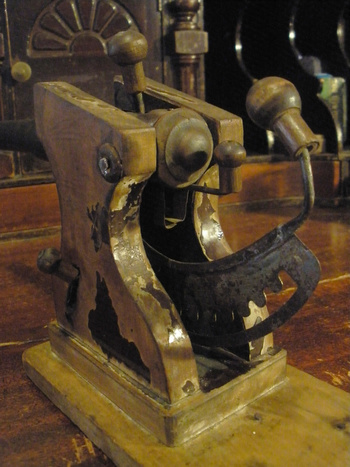 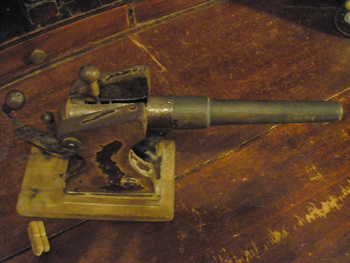 This just came in today. I had never seen one before, and couldn't find another one, so I knew I had to have it. It was in really rough shape, and I knew that going in. The elevation adjustment piece looked like it had been pressed between a waffle iron, the barrel was almost falling out, and the metal around the top lever was curled and warped pretty badly.

As soon as I took it out of the box I knew I had to start fixing it up. I spent a few hours carefully taking it apart, hammering out the dents, straightening the bends, removing the active rust and wiping off the grime. I even got the mechanism to work fairly reliably. After everything was said and done I oiled it up and it looks great!

Here are some images from the person I got it from. You can see how wavy and rusty of the metal is, that and the barrel falling out.
http://i706.photobucket.com/albums/ww61/Dr-Rambow/cannon003.jpg

Elevation goes from horizontal to vertical, depending on the notch in the elevation plate you choose. The lever on the side releases the lock on the elevation, and pushing or pulling the rearmost lever adjusts it. The top lever pulls back the spring, and the small lever on the back fires it. Simple pea-shooter style plunger that propels the projectile, which is tossed down the front of the barrel.

On either side there is a "T" within a six pointed star, applied via the brown paint. Not sure of the meaning behind it, its the manufactures mark, or something else.

I have no idea who made this or when. Like the other cannon I showed a few days ago, I'm not certain if it is a manufactured or one off piece. I would really love to know if anyone finds anything.