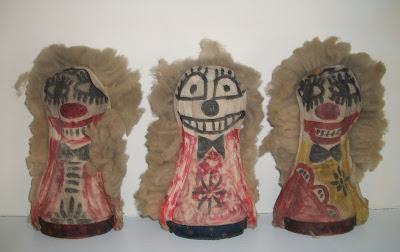 Years ago, I had the fortunate pleasure of visiting one of the most prominent collectors of American folk art on a regular basis. Besides teaching me much, I was learning at the feet of a master. (Literally...there was no room in his house and I had to sit on the floor.) We traded things back and forth monthly. I would study them, he would study them, and once in a while swaps were made. The stuff didn't have much financial value then, and I'm not sure if it does today.

I once brought the collector three huge carnival knock-down targets, each about 3 feet tall, with effigies of Hitler, Mussolini and Tojo painted on them. I didn't want Hitler in my house, so I hoped to trade them for an equally not valuable whittled miniature cane he had by a carver from Georgia. (Years later I saw Saddam Hussein painted on some carnival punks at the boardwalk in Seaside Heights, New Jersey, so things never change.)

I cabbed them down and presented them saying "check out THESE punks!"

What surprised me was that he immediately asked me why I called them "punks" and I really didn't have an answer. I'd just always known carnival knock-downs as punks. The collector was puzzled, which surprised me, as he had earlier curated museum shows having to do with esoteric material culture from the sideshow and such, and he certainly owned some. I figured no one could puzzle the master.

He told me "punk" was a term used to refer to a younger homosexual man dating an older man. I had no idea. To me at the time, punks were the Ramones. Or as Joe Franklin, perennial host of a local TV show called them "The Ray Mones" while appearing as puzzled by them as my collector friend was at my punks.

I knew gay "punks" were called "twinks" which I believe may still be in common usage. I'm a little isolated here, so I don't know for sure, and we should refer to all without derogatory terms anyway. But that also makes sense, as my collector friend was Eastern big-city based, and I suspect knock-down targets received their punk name in the Midwest.

If you look up punk in a carny lingo dictionary, the slang term has numerous uses. As a rube, a child. a trick, a fake fetus in a bottle, a person primed for a scam, an "easy target" as it were...though the punks here were intended to be a hard target. That's why they had fur...to create the illusion of width, and the carny would also encourage the punk in FRONT of him to lean in "for a good toss" because you would then be throwing off balance. He would watch as ball after ball whiffed through the fur not moving the targets at all.