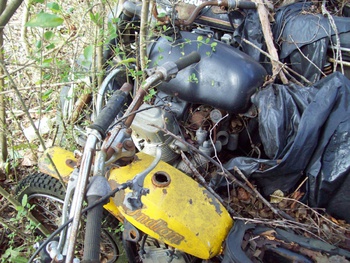 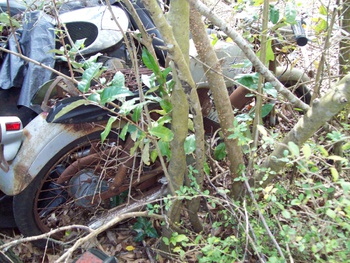 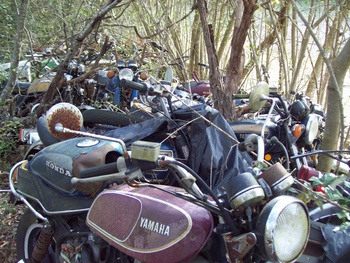 I thought this was interesting. I search the internet and travel to different states to buy bikes like some of these and 5 miles from the house! I like the rare Harley Leggero in the second photo and the Moto Guzzi V7 700 in the first picture. It's got to be one of the first ones built. There's a Yamaha tank on a Honda and a Honda tank on a Kawasaki in the third photo. Don't know why because the rest of the bikes have their tanks. Each bike has it's own story, I guess. I couldn't believe how nice the chrome panels were on the Honda Dream(2cd photo). Many people think the Honda Benleys are Dreams and, and all Hondas with the fat fenders and pressed steel frames (50s to 150s and 160s) are called Dreams. But the real Honda Dream is the CA77 305 which began as the CA72 250. I couldn't get down in there close enough to tell what this one was. But I could feel the emblem on the far side of the tank. It should be marked 250 or 300. I bought it from the guy for less than half of where he started after applying some tactics I learned from Mike Wolfe and Frank Fritz. The side panels alone would bring more than I paid for the bike. I only part out what I have to. To most people this would be scrap but I enjoy gettin' these things goin again. I can't wait until it dries out enough to get down there again and see what else he has.