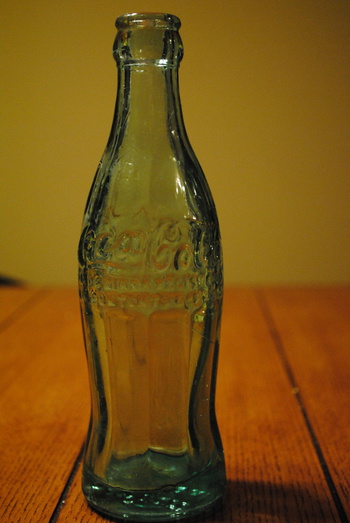 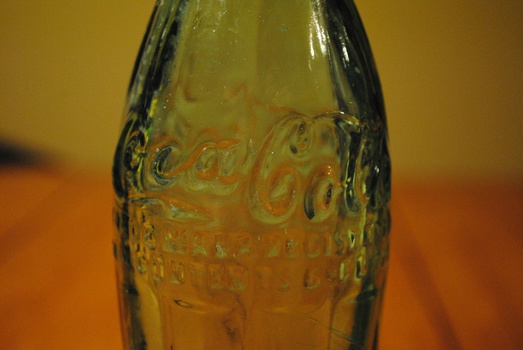 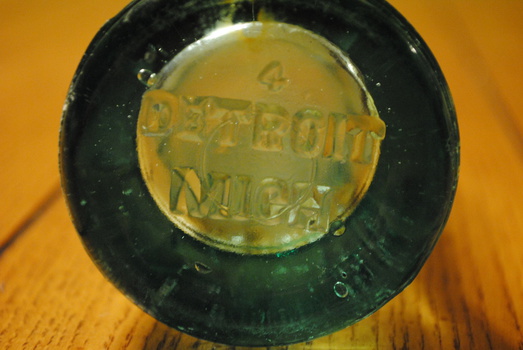 The person I bought this from dated this bottle 1911. My research shows some some inconsistency with that date. Coca-Cola bottles were mostly straight sided until close to 1920, however, this signature bottle shape was also in production around 1915 or 1916. I am not especially drawn to Coca-Cola items because it is such a common image. I prefer bottles with logos and brands I find less frequently. I am, however, drawn to bottles produced in Michigan and very old bottles, like this one. I like the weight of them, very heavy and distinct. They also tend to have a very thick base and you can often see inconsistencies in the shape of the glass on the inside of the bottom. Coca-Cola has an interesting place in history, not just because of it's fame, but because of it's early bottling process. It was determined that it would be too expensive to bottle Coca-Cola in Atlanta, GA (where Coke was invented) and ship across the country because glass and liquid are so heavy. Instead, they opened "bottling franchises" in different cities and states. The Coca-Cola syrup would be made in Atlanta and shipped to the franchises where they would add carbonated water and bottle it there. It was then distributed more locally from different franchises. So you can find a lot of really early Coca-Cola bottles from different cities all across the country, whereas other bottlers didn't start franchise bottling for some time after that.