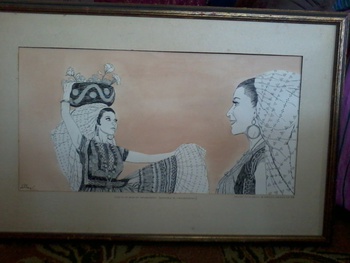 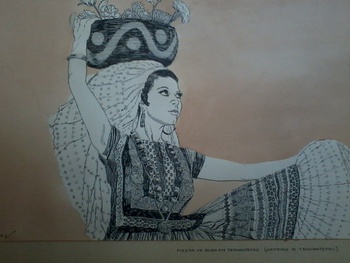 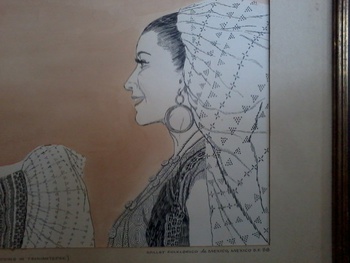 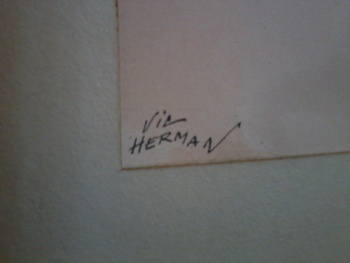 I bought this piece at an auction for an American Legion Veteran's Fundraiser. One of the Auxiliary members of the post was Virginia Herman, wife of Vic Herman, also famous for her cartoons from WWII "Winnie the WAC". She donated this painting to the auction and I fell in love. It is so simple, yet so detailed. Sorry the first picture is askew...swear I don't drink!! On the bottom right it has the signature"Vic Herman", on the bottom middle is written, "Fiesta de Boda En Tehuantepec (Wedding in Tehauntepec)", and on the lower left it says, "Ballet Folklorico de Mexico, Mexico D.F. '68".
I know that Vic herman loved Mexico very much and was somewhat of an Ambassador to try to expose Americans to the beauty of he Mexican country and culture, and vice versa. Many of his pieces seem very commercial to me, but he was trying to appeal to the American tastes. This piece was one he did for himself, never sold it, and he loved the beauty of this piece, according to Virginia, his wife. I don't know what the "D.F." after Mexico means. Could that be a part of region of Mexico?? Has anyone any knowledge of Vic Herman and his Mexican-American Art Diplomacy, for lack of a better term? Thank you to the awesome "Think Tank" that is CW, Mich