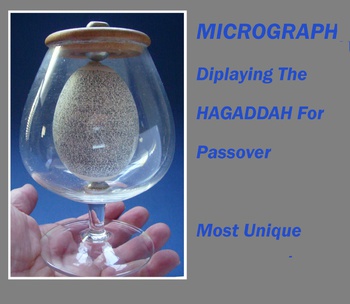 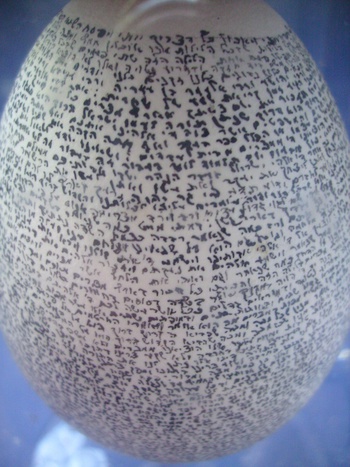 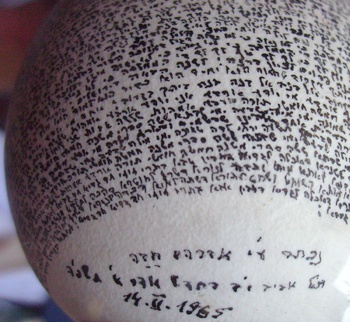 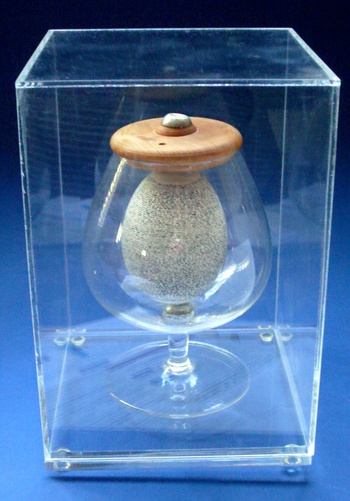 HAGADDAH For PASSOVER Sedar Micrograph on EGG Made in 1965

The Most Unusual KOSHER For PASSOVER Item Anywhere

Inscribed on the surface of an eggshell by artist Abraham Chadah, Tel Aviv, completed the 12th day of Adar I, 5725 (February 14, 1965). Origin of the Passover Sedar Egg….during the 830 years that the holy temples of Jerusalem were in existence, every Jew in ancient Israel, had to bring to the Jerusalem temple an animal sacrifice on each of his 3 pilgrimage festivals—Passover, Shavuot, Succos—an animal to be sacrificed, on the temple alter, the Korban Chagigah (Festival Offering).

On Passover, certain portions of the Korban Chagigah was eaten, along with the special sacrifice, a lamb, the Korban Pesach (Passover Offering).

During periods of the loss of the holy temples, when sacrifices were suspended, the festival and pascal offerings were symbolically remembered during Passover, in our prayers, and at the festive meal, by placement on a Kaarah (Sedar Plate). Two cooked foods: traditionally a shank bone and an egg, slightly roasted.

Until the 3rd holy temple will be rebuilt, we recall the sacrifices, not by roasted parts of animals, but by those of fowl cooked, but slightly roasted, which are generally eaten during lunch of the 2nd day of Passover.

Uneaten will be the Hagaddah Egg, serving daily as a daily as a reminded of the Exodus, bidden as we to daily remember the Festival of Freedom.

The piece is uniquely identified by the artist, and was featured in a newspaper article about it, and the holiday of Passover, years ago. Included with the auction are 8 x 10 black and white photos of the piece.

This is the only one know to exist, and it is fully legible.