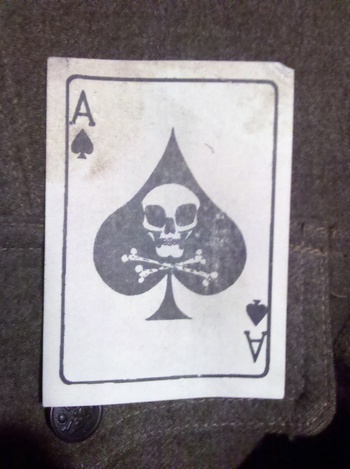 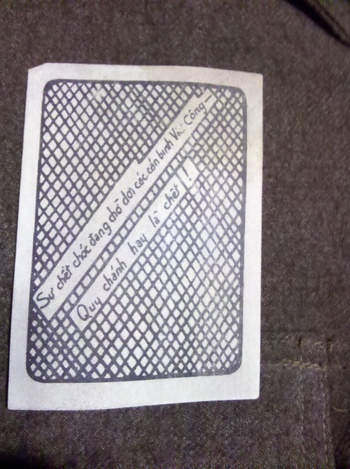 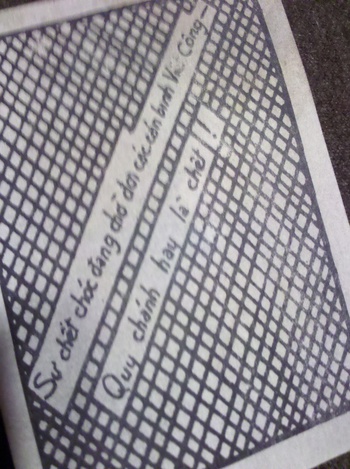 Last summer I went to a garage sale, and this guy had a whole duffle bag of Viet Nam era uniforms, equipment, a helmet, odds & ends, etc. I didn't really go through it, but I paid $100. for the whole bag. It had several sets of jungle fatigues, gear, web belt, canteen, helmet, the works. Well worth the $100 bucks I paid. While going through the stuff, I found this card inside a G.I sewing kit. I have no idea what it says on the back, but these cards were popular amog the Troops durring the Vietnam War. I googled searh "Vietnam Death Card" and this is what I got:
The ace of spades, the so-called "death card" is featured in many movies about the Vietnam War. The symbol is also depicted on various unit crests, special operations privately-made patches, collar insignia, and on flags and painted vignettes on military aircraft and gun trucks.
What do we know about the ace of spades in Vietnam? Did it truly terrify the Viet Cong and North Vietnamese Army regulars and leave them trembling in fear? Did American military units all throughout Vietnam use it? The answers would seem to be a resounding "no." In fact, some intelligence studies indicate that the Vietnamese had no concept that the ace of spades represented death. Many units never used the cards and the majority of troops I met never even saw one used in-country.
I spoke to several combat veterans about the cards. One said:
Sorry I can't help. I've heard of them but never saw one and never heard of them being used in my AO during my time.
Another commented:
The story we heard was that the Vietnamese were inveterate card players--and that was true; I saw mamasans playing cards many, many times in any shade that was available--and that some of the common superstitions about certain cards had penetrated Vietnamese culture, by way of the French. For instance, the Ace of Spades was a death card. The Queen of Hearts was a love card. The Jack of Spades represented an enemy.

So why was the ace of spades so popular that some individuals or units actually ordered them from playing card manufacturers to place on the bodies of dead Viet Cong and NVA? The answer seems to be, because the American troops just loved them. Although the cards were allegedly anti-Communist PSYOP, in fact they were really pro-American PSYOP. U.S. troops got a kick out of them and loved the idea of leaving them on bodies. Like wolves, it was a way to mark their territory. It proclaimed them the biggest and "baddest" varmints in the valley of death. The cards motivated and encouraged American troops far more than they terrified the enemy.