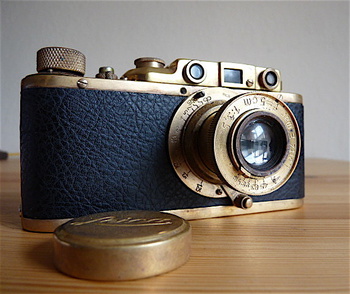 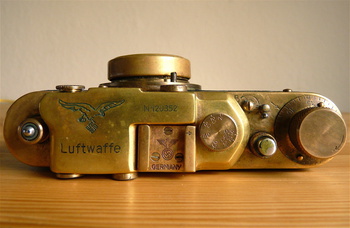 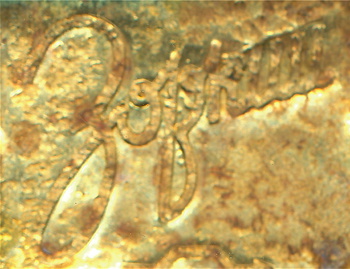 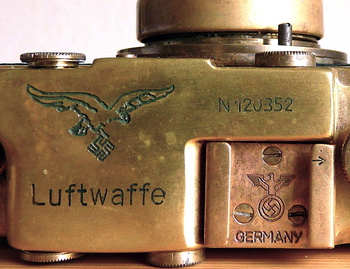 This is a Leica IIIC counterfeit Luftwaffen camera either made originally by Zorki, FED's or Zenits of the Soviet Union. Collecting old Soviet fakes is not an easy task since most are not in their original state of manufacture. Over their 50 year lifespan many hobbyists behind the iron curtain took lavish liberties and made modifications to the already counterfeit designs. It is highly likely if you come across one of these cameras, you can count on it being tampered with at one time. The Soviets had often claimed and placed swastikas and eagles on these cameras for the sake of "das capital", since collectors love the notion of gaining a 'true WWII Leica'. It is true that Leica did manufacture cameras for the war, however, NONE, ever came engraved with the swastika nor an Eagle such as the example, above. Does the collector prefer a Soviet counterfeit Leitz IIIC without the notorious symbols or does the collector prefer a counterfeit Leica Luftwaffen engraved with the swastika carried off by an eagle? These cameras turned up in the nineties after Poland, East Germany, Bulgaria, Hungary and other Iron Curtain countries opened their doors to tourism. Many tourists brought back what they perceived as wartime loot and booty to these shores and never suspected the ruse. These "rare prized" war booties were sold in flea-markets! If you come across these cameras, figure their prospects as FAKES still will become rare one day, since no more than 2-3 thousand were produced. They could achieve cult status such as the LOMO Graphic Society has become and someday worth big bucks. Without this status, however, they still will become collector's items if only knowing their curious Soviet origins with offensive NAZI symbolism will be a niche in the market, itself. Of course the flea marketeers who originally sold these cameras to un-suspecting tourists are like the merry paranksters...... Soviet "fakes" have been around since 35mm photography. Forging a fake was commonplace since all that was needed was to polish off the original engravings by local repairmen. It would be highly suspect if German infantrymen during WWII were carrying Soviet cameras, (SPIES), so to get a camera forged into a Leica was highly advantageous. The camera plate above appears to have been a modified Zorki forged into a non-existent Leica IIIC Luftwaffe fake. The camera works, incidentally and has a "collapsible 50mm Elmar" attached. It even takes my 90mm f.4 Elmar or any Leitz screw mount lens.