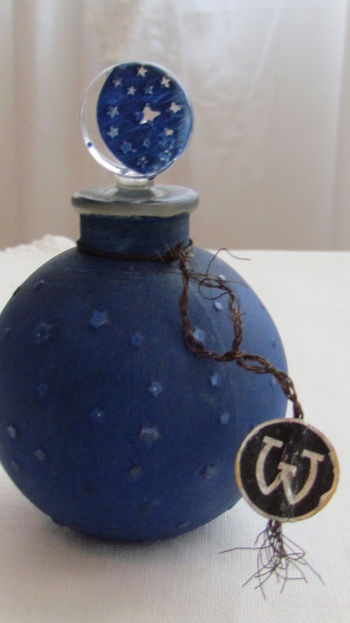 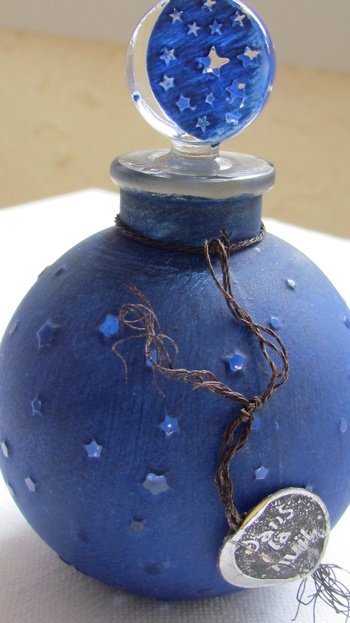 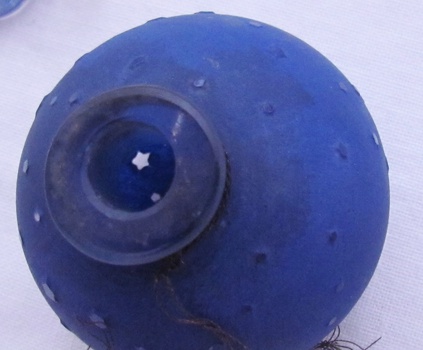 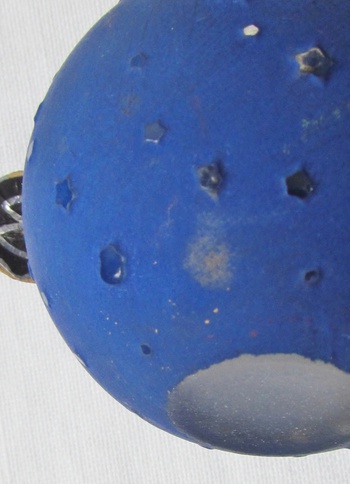 This is an early issue of Rene Lalique's celebrated boule perfume bottle / flacon, circa 1924, designed for the first perfume launched by Les Parfums Worth, Dans la Nuit ("In the Night"). It features a very early design for the DLN stopper, i.e., a disc with an eclipsed moon of crystal-polished glass in bas-relief against a cobalt-stained sky filled with raised, crystal-polished stars. This style stopper was available from the mid-1920's through the mid-1930's, when it was discontinued due to an allegation of trademark infringement. Proctor & Gamble had objected that the star-moon motif was too similar to its Ivory soap logo. From the mid-30's on, the boule was issued with a stopper featuring the eclipsed moon and, in lieu of stars, the perfume name rendered in a lowercase calligraphic font.*

Bottle is evocative of a velvety night sky filled with stars. Stars on the body produce different reflective effects, depending on the quality of ambient light, and on the presence and/or 'saturation' of matte blue patina. In lower light, stars may present as a glossy crystal blue; in brighter light, they may glow like stars in a night sky. Where matte blue stain over crystal-finished stars is absent or has diminished, stars may shine very brightly. It is interesting to note that wear to the cobalt patina only enhances the beauty of this bottle. This patination style wears on the polished areas, i.e., on the crystal-polished stars in bas-relief. Areas of frosted glass that have been stained blue retain their stain remarkably well.

The classic DLN boule is one of the most coveted of all Lalique perfume bottles, the iconic perfume bottle for Worth, and one of the icons of the Art Deco era. France Today: The Magazine of French Travel and Culture, in a recent online article commemorating the 150th anniversary of Rene Lalique's birth, hailed Lalique as "the most multifaceted maitre verrier of his time", and presented only one photograph in illustration of his perfume artistry, i.e., this DLN boule, with this style stopper.** Lalique produced commercial perfume bottles for many au courant purveyors of scent, e.g., Coty, Houbigant, d'Orsay, Molinard, Roger & Gallet, Arys, Lucien Lelong, et alia; he also designed bottles exclusively for his own art glass boutique. It is thus interesting to note that the only perfume bottle illustrated in France Today was the boule.

Lalique's perfume bottles were stars of the 1925 Exposition des Arts Decoratifs; they are acknowledged masterpieces and are still today avidly collected. The DLN boule was issued in various glass/color treatments, but this style is regarded by many (including myself) as the most beautiful. It is not surprising that this bottle should have been cherished for 75-85 years.

The original Dans la Nuit scent was a floral amber fragrance with notes of black currant, iris, jasmine, rose, tuberose, and musk. Composed of costly and choice elements, a gift of this scent would have been a handsome gesture. It was a favorite perfume of the Jazz Age set.

Worth created a number of other successful perfumes for which Lalique designed collectible bottles, among them: Vers le Jour, Sans Adieu, Je Reviens, Vers Toi/Pot des Fleurs, Projets/En Croisiere/Clear Sailing, Imprudence, a range of more traditional single-floral-theme scents in 'the daisy bottle', and Requete (Marc Lalique). At the close of World War II, Je Reviens ("I Will Return", or "I return") was a favorite gift of American soldiers to their sweethearts back home.

Early Worth Deco fragrance bottles, with their geometric presence, streamlined forms, stepped designs, and chevrons were featured in elegant advertisements designed by distinguished Art Deco illustrators, e.g., R. B. Sibia, Scaioni, Henri Mercier, and Germaine Berard. Today, these are are collected as art. Even more enduring are the Worth Lalique bottles; within the last two decades, they have been the subject of a veritable frenzy of collecting

** France Today: The Magazine of French Travel and Culture, "Lalique" January 16, 2011, a www.francetoday.com article originally published in the December 2010 issue of France Today.