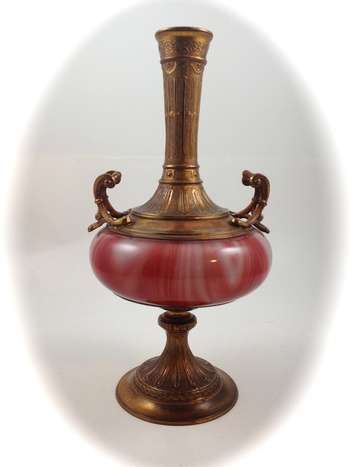 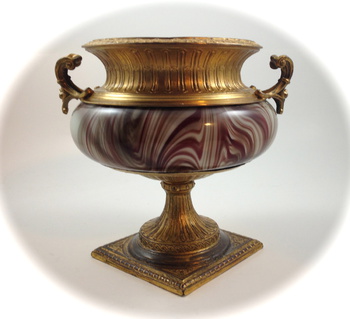 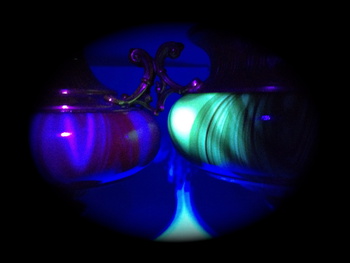 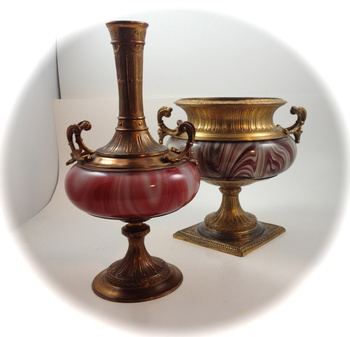 I had a hard time trying to write the title for this article; these pieces are more metal than glass, and the glass inserts are just that - inserts that have no top or bottom - just a ring of patented (or privileged, as they called it in Austria) fabulous Loetz mamoriertes glass sandwiched between an ornamental gilt metal base and and equally ornamental top with two handles. Featured here are two variations of marmoriertes - Carneol (photo #1) and Onyx (photo #2). An exact duplicate of the carneol piece in photo #1 is on display in the Passauer Glasmuseum in Passau, Germany.

Between 1880 and about 1897, nearly one-third of Loetz production was dedicated to marmoriertes glass in an array of colors meant to mimic very closely various types of polished semi-precious stones. This was also the time that the emphasis the historicist movement was most prevalent - the re-creation of the styles of various historical eras*. I would venture a guess that the inspiration for the vessels pictured here did not have to go back very far - early Victorian, perhaps? I would love to hear thoughts on this.

Photo #3 shows a closeup view of the two pieces under black light. The onyx in particular reacts with a vivid green glow, indication the presence of uranium in the glass mix - this would point to a post-1890 production date. Marmoriertes production continued until about 1910**.