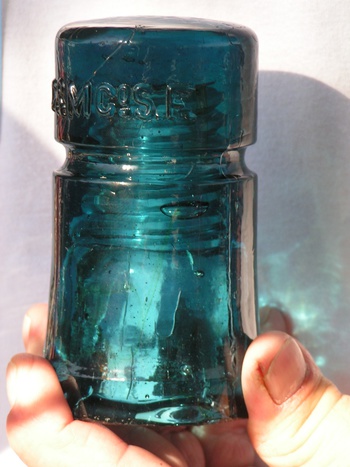 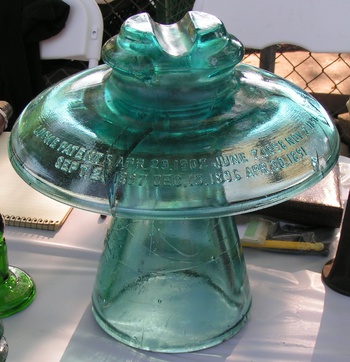 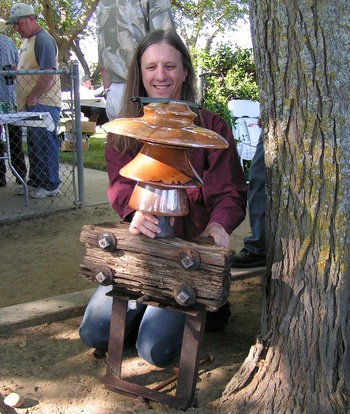 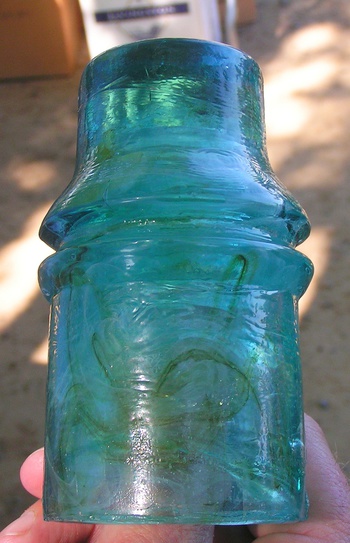 Hello fellow insulator enthusiasts and welcome collectors of all ages and disciplines. My name is Mike Doyle. I have been commissioned by Bill Rohde to chronicle the latest episode in the sixteen year history of a fantastic back yard insulator collecting hobby swap meet and deep pit BBQ called the Rohde Insulator Roundup. The event, hosted by Bill’s parents Don & Camille Rohde, was held on Saturday, April 21st, 2012 at the Rohde Ranch in the San Joaquin Valley, Fresno, California, USA. Saturday morning was as cool and clear as any perfect spring morning should be. The forecast high of 93F would prove to be rather warm for mid-April in California but the Rohde’s tree shaded backyard was a comfortable, festive venue for the eighty or so folks who enjoyed the event.

During the weekend I hosted the National Insulator Association’s Eastern Region VP, Matt Grayson, who was visiting from Queens, New York. Matt’s a ‘Mud Collector’ which means that his hobby interests are in porcelain and pottery insulators rather than glass or other materials. This show is traditionally exciting for mud collectors because the Rohde Ranch hosts one of the most extensive (if not THE most) North American porcelain insulator collections known to exist in the world. Although begun by Mike Guthrie decades ago, Bill acquired the collection and has continued to expand and develop the awe inspiring assortment of electrical hardware, signage, and related material such that it now occupies about a thousand square feet of vertically displayed material stacked nearly 20 feet high!

Matt and I left Visalia at the crack of dawn, dashed up CA-99 in light traffic to Fresno and turned left at the ‘Big Blue CD257 Mickey Sign’ out on Friant Road by the old orchard and down the insulator lined driveway approach to the ranch. We arrived during breakfast and the morning crowd was finishing their first cup of coffee. For those of you still planning your first visit to this event, I’ll share some details. Friday is setup day and a number of long time Rohde family friends including Lou ‘Pin-Man’ Hall, Bill Heitkotter, Bob McLaughlin, Dave LeForge, Dwayne Anthony, and many others arrive a day or two early to assist with the extensive setup process that helps make this such a wonderful event. Friday evening Don & Camille treat the ‘set-up crew’ to a Hometown Buffett dinner in Clovis.

As we arrived at the house we saw three beautiful custom street machines parked out by ‘The Shop’ which were shining in the morning sun. The ultra custom hot rods were displayed by Don & Bill Rohde and Bill & LuLu Harrison. Bill Rohde’s Corvette is a work in progress and its dual carb growl gave me goose bumps when Denley Bryson climbed behind the wheel and fired that baby up!

It certainly was shaping up to be a glorious day in Insulator Land and it looked to me like there was something for everyone to enjoy. Larry & Alice Shumaker were set up at their customary table as were May & Colin Jung. Dwayne Anthony & Dave LeForge, co-hosts of the D&D swap meet in Grand Terrace, California near Los Angeles were set up by the fence. Dave Elliott was over from Mountain View with his energetic and enthusiastic companion, Jacob Rorie. Larry Perera spent quite some time looking through the photo archives that Don & Camille have been building. Kathy & Paul Greaves from Granite Bay brought out some nice goodies. I saw Jim & Bob McCarrick, The Impostulator Twins – Pat Brady & Rick McElhinnie, Mark Merzoian, his brother Bob, and Bob’s son, Michael. Mark & Bob host the Merzoian Brother’s Porterville, California swap meet in Hummingbird Hollow in early August. ‘Bart Man’ Magoffin and Dave Cross showed up with a good story or two as always, and Curt Randles brought a nice assortment of insulators, bottles and related items to sell. Curt does a great job tumbling bottles and insulators if you need that sort of work done. Last time I checked Denny Hackthorne tumbles glass as well. Denny was up from Riverside and was caught with another Westinghouse on his thumb. Loch Henson & Steve Marsh who recently won honors with his Hemingray specialty display at the San Jose National have a very nice ranch in Placerville, California. They have announced that they will host an insulator swap meet this summer at their place in the gold country foothills of the Sierra Nevada. Sounds like a “You Gotta Be There!” to me.

As I said at the top, the Rohde Ranch BBQ is in its sixteenth year and seems to get better and better as time goes on due to the friendship and hard work of many folks. Some of the gathered friend’s associations with Camille, Don, and Bill go back to the ‘60s and ‘70s. Folks both in and out of the hobby make this great show possible and in addition to the setup crew I wrote about earlier many a Thank You still needs to go out to Suzie Villa, Nancy & Eddie Brown, Kat McClanahan, Patty and Joe Huizar, Joyce & Gary Spoelstra and DeeDee Hall who are a very important part of the behind the scenes support staff that works hard to make this event a continuing success. Long time hobby friends Oscar & Charlene Dunlap, Mary & Bob Stafford, Cindy Lorente & Mike Stafford, and Larry Perera were seen lookin’, sittin’ and talkin’ with Bill, Don, and Camille Rohde at various times throughout the day.

Barbara Smith and Carver Mead made the rounds as did Kevin Meehan and Paul ‘Putt’ Puttkammer. LuLu & Bill Harrison brought their insulators and colored funnels down in a beautifully restored International street rod. Mike ‘Bring Me Your Fred Locke’s’ Spadafora was there with his cool, green, hybrid and the big, classic mud (also available in kits.) Jerry Buckland had a killer CD342, Locke 25 on his table. John Contreras was up from Imperial Valley with beautiful, assorted porcelain and crated strains and hardware displayed for sale as only John can. Beverly & Gary ‘Power Tower’ Yarborough came out from Brown’s Valley and shared some great stories. Dave Hall stopped by as did Patricia & Jim Decker down from Tracy, CA. Rachel Schaad & Scott Prall from Citrus Heights were there as was the entire Brown clan from Exeter, California including Shirley, Daniel, Andrew, and Dave.

Later in the day, after touring ‘The Shop’ Matt Grayson and I spoke about his experience. Matt agreed that Bill’s collection represented an awesome and historic assortment of rare and one-of-a-kind pieces in exceptional condition and color. And indeed it does. Those of you with large collections may be thinking about how dusty it must be out there in the shop. Well ladies and gentlemen I am here to tell you that there is no dust and there are no spider webs. The collection is pristine thanks to the meticulous and tireless effort of Kathleen McClanahan (your friendly neighborhood Aflac agent.) She spends her spare time lovingly washing and polishing every item in the collection from floor to ceiling in preparation for the show. Last year she worked on all the multiparts in the racks. And this year she worked on all the uniparts on the shelves. The place is nearly spotless and everything is nice’n purdy!

The National Insulator Association board of directors was very well represented by Lou Hall, Don Briel, Dan Gauron, Matt Grayson, and Bill Rohde. Lou ‘Pins & Brackets’ Hall had a table covered with cool iron. Jeanne & Don Briel (the new insulator value guide publishers) were down from Providence, Utah with a nice assortment of insulators for sale. Bob McLaughlin brought an impressive assortment of all things McLaughlin and shared with me that he sold the McLaughlin commemorative mold to Rick Soller. In fact, I learned that Lou and I will be carrying the McLaughlin commemorative mold with us when we drive to KC for the 2012 National. The Golden State Insulator Club had a scheduled meeting at the Rohde event and during the course of the meeting they elected Dave Elliott to be their new president.

As with many families, when a member is unable to attend a family event the others offer their prayers and share their feelings of concern for those missed. Likewise the Rohde’s ‘extended family’ shares their prayers and encouragement to our favorite Union Pacific Railroad specialty collectors Norma and John Giudici. Longer than many of us have been active in our various hobbies Norma and John have been attending shows across the west. They are both very engaging and entertaining in conversation and they’ll take time to share some of the best stories you’ll ever hear told at any show. At one point they had one of the greatest collections of UP hardware and go-withs ever assembled in a private setting. We signed an insulator and wrote a card which we all hope finds the Giudici’s safe and well! Hope you guys can make it to the 18 May Cayucos show.

No Rohde Roundup report would complete without sharing a look at the unparalleled deep pit BBQ banquet featured at this event. By the time Matt Grayson rang the chow bell nearly 100 people queued up to wait patiently for their turn to dish up some shredded, deep pit BBQ'ed, sirloin tip steak (YUM!!) extraordinary ranch beans, fresh toasted garlic bread, tossed salad, fresh shelled shrimp, nuts, chips and dips (served in porcelain and glass insulators!) deserts, ice-cream sandwiches, milk (white and chocolate), water, soda, OJ, and much more. No one goes hungry at the Rohde Ranch. During the meal, Don and the crew literally walk from table to table offering hot seconds and making sure that everyone has exactly what they need to make their lunch extra special. Our hats are off to Camille, Don, Bill and their many helpers for another fantastic show!

With sixteen years of the Rohde Roundup behind us we turn our attention to the next shows that are right around the corner. Watch http://www.insulators.info/ for Cayucos show dates and the possible announcement of a new Placerville show. Remember that the Spokanistan show in Washington is in late May. Tommy Bolack will be hosting his annual swap meet in Farmington, New Mexico this summer and your National will be in Kansas City, Missouri. Jim Sinasek hosts the Bend, Oregon show in July and The Merzoian’s vineyard swap meet is in August at Hummingbird Hollow in Porterville, CA. Big Sky at Helena, MT is also in August. The D&D swap meet at Grand Terrace, CA is in early October and Springfield, Ohio is on the same weekend as the Tulare show in early November. Shoot! Before you know it we’ll be planning to go to Auburn again in December. Lord, grant me the wisdom! ….. An insulator junkie has to take life 'one show at a time,' right?

All you thread-heads, Listen Up: Getcher glass and mud traders into a good, sturdy box. Getcher swap lists and price guides updated. Flip open yer Crown Jewels to Coming Events and click in the Show Finder for details on the next swap meet or tailgater in your area. Dig that dusty wad of cash out-o-the Fred Locke pinhole and get all yer friends together for an insulator road trip because......