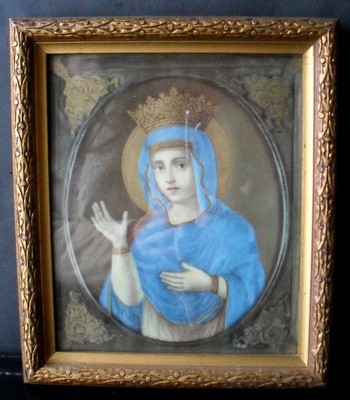 Known as the most important Artifact ever to have arrived on New Zealand shores...the "Pompallier Madonna" was brought out here in the mid 1800's by a French Missionary.

Rumours persist that their was secret Vatican involvement after the original Byzantine Parchment was stolen from a local High School in Wellington NZ in the 1960's. There are also rumours that the next day it turned up in a secondhand shop window but as the original has never been found it is a true Unsolved Mystery!!

Given to the Pope Pius IX in 1846 as a Coronation Gift by The Sisters of the Campus Martius. He later gave it to Bishop Jean Baptiste Francois Pompallier in Rome in 1847 - to bring the ancient small painting to New Zealand to establish the Catholic Church in New Zealand. Pope Pius IX (1792-1878) he proclaimed the dogmas of the Immaculate Conception of the Virgin in 1854 his pontificate was the longest in history. Henceforth the Virgin Icon representing his vision of the Catholicism. Interesting it wasn't Christ at the centre of the faith.

In 750AD, The Sisters of the Immaculate Conception took it from Byzantine to Rome during a time of iconoclastic persecution in the East.

Mine is a Lithograph Reproduction of the Original and the same size. It has golden gilt? on it. The original was in an oval frame as shown in the reproduction.

I hope one day to stumble upon the original if it is still in NZ.

I am unsure as to HOW MANY LITHOGRAPHS EXIST??? Would anybody know???

An interesting article on this Icon in NZ Newspaper - (i stole bits :-)

A REAL LIFE DA VINCI CODE - who can crack this? 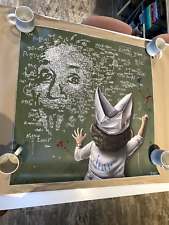