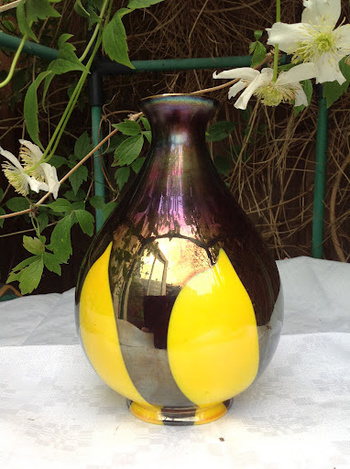 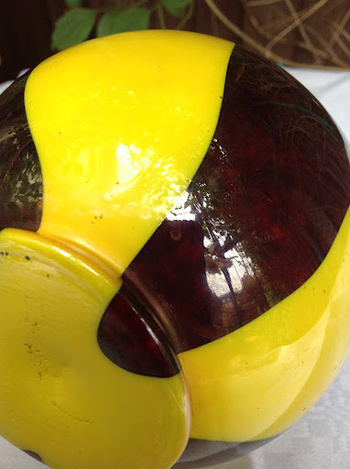 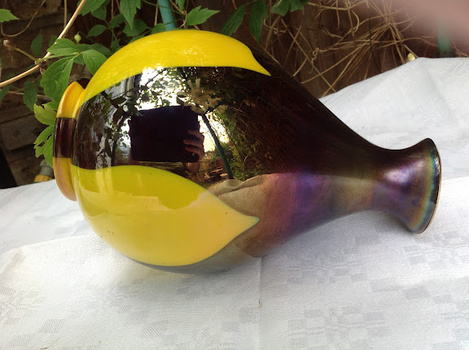 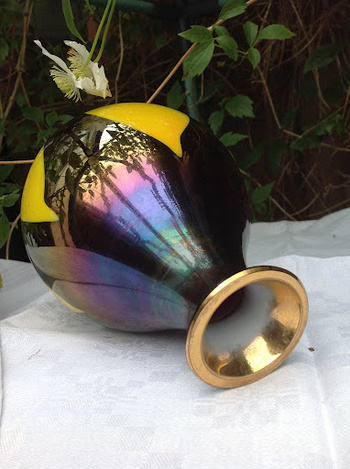 My best guess is that this is Kralik - but I have no real idea! All input appreciated.
I base my guess on the following:
There is a vase which looks to me to be similar in finish on Warren Galle's fabulous site - http://sites.google.com/site/bohemianglassandmore/kralik. Differences - that is a ball vase, a different colour scheme (blue/cream), no gilding on the neck.
This shape is, however, reminiscent of some of the deco shapes to be found at http://www.kralik-glass.com, Kralik visual decor index A-M, deco shapes.
I don't know the technicalities, so if you'll forgive my ignorance and poor terminology, the vase appears to be made of red mottled glass, with an amazing mirror finish, with the yellow pulls applied over and heavily iridised over that. The red glass is hard to see because of the mirror/iridescent finish, but what you can see of it in picture 2 looks, to me, similar to those posted by Jericho at http://www.collectorsweekly.com/stories/52831-kralik--single-color-confetti?in=442
and by bohemianglassandmore at
http://www.collectorsweekly.com/stories/39723-kralik-mottled-blood-red-vase-ca-1930s?in=442

Then, when you look at bohemianglassandmore's post, you can see that the neck treatment is similar - gilded rim, carrying over onto the inside, over a white ground ending just below the gilding inside the neck. My best guess is that a layer of white was added before the gilding so that the red ground did not dull the gilding. But I have no real idea and would welcome thoughts on that.

You might also see a superficial similarity to Czechman's fantastic piece at http://www.collectorsweekly.com/stories/43167-czechoslovakia-art-glass-vase-kralik?in=442 - if you swap the colours round.

There are no markings anywhere - the vase came from Germany.

So, have I missed an obvious, known decor - or am I barking up entirely the wrong tree?