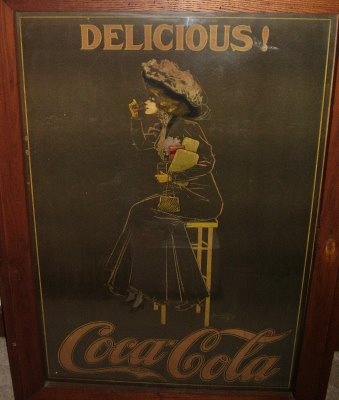 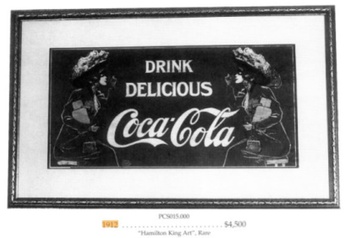 This has been in our family since it was made. My grandfather used it as the backing for a large piece of artwork in his office which he opened around 1910 where it remained until discovered there in 1970. We have never found another like it, or this particular artwork in this form. I know that the trolley sign I also posted (which I do not own) shows a form of it, and that there was another similar design on I believe a 1912 calendar. (found in Petretti's Coca-Cola Collectibles Price Guide, 11th edition look on page #22 for the calendars and page #65 for the trolley sign from 1912) The background is black but in the picture, taken without a flash due to the glass over the ad, shows up as a reddish brown. The item is on a cardboard type of stock, about 1/4 inch thick and measures 28 inches x42 inches. It is completely outlined with two yellow lines, about 1/4 inch wide with about an inch between them. It looks like a pastel sketch on black. It shows a woman facing left, in a large hat, sitting on a tall stool with an armload of packages, drinking coke from a fountain glass. She is wearing gloves and button up shoes. The signature appears to the right of the stool, just above the C in Cola, at the hem of her skirt. It says printed by wolf and company in Philadelphia in the lower left corner, with a copyright by the Coca-Cola Company 1909 in the lower right hand corner. My husband is a printer, and has studied this with some interesting discoveries. In some areas, you can see a dot matrix type design, as you would in printing. In other areas, it looks as if it has brushstrokes or really thick ink applied and there is actually some texture to those areas. What exactly is this? A print? A lithograph? Is it the only one of it's kind, designed for coke, then used in different forms later on? Have you ever seen another like this one. I've never known what to call it! Any information would be greatly appreciated.