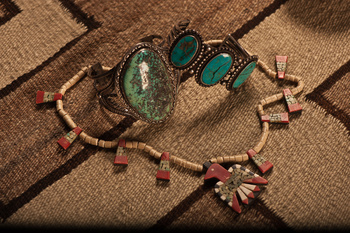 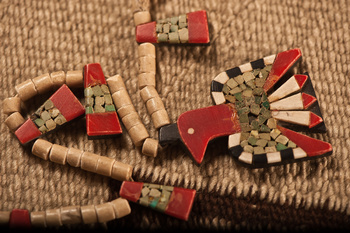 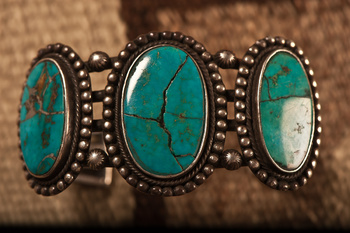 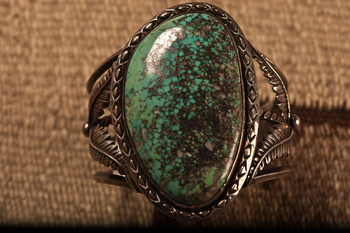 Indian Jewelry both old and new has a appeal to me which goes back to my childhood living in Albuquerque, New Mexico. My Grandfather owned an small grocery store across for the old train station, named "White House Grocery." Everyday American Indians walk the streets selling their work and as a little boy I got a first hand look at some of the most beautiful Jewelry, that I was restrained from touching. So it is now a big part of my American Indian collection. I have 2 large bracelets which I get to ware once in a while, an when I go back to Albuquerque, (which is often) I take one with me. The 3 stoned bracelet is made in the 1930's and I picked it up in 1972 from an Antique dealer, whom had it for several years. The Bracelet had to have repair work done on it because the maker had put leather under the stones which caused the stones to crack when the leather drew up to the center. I keep the original stones because of their beautiful color which also seams to get a comment or two from Indian Dealers as well as Collectors who want to know if it for sale. This bracelet is big with a spread large enough to fit my 9 1/2" wrist. The Necklace is a Santa Diemengo Pueblo Necklace made in the 1940's. My mother bought it from a street dealer for a dollar and it is made from red and white plastic, black car batteries and low grade turquoise glued together. The beads are made of bone and they were strung on a cotton string. When most people see this Necklace they think that its is made in a craft class but it is far from that. It took a lot of time and skill to made the Necklace and I enjoy its looks. The Large Bracelet is a modern Bracelet made by an American Navajo by the name of Norman Frazer whom made several item for me in thee 70's as well as repaired the 3 stone bracelet. The single stone is called spider web and gets it name from the black spots found in the stone. Keep you're eyes peeled when looking at jewelry at sales you mite find a Santa Diemengo Pueblo necklace of a buck. Hardbrake