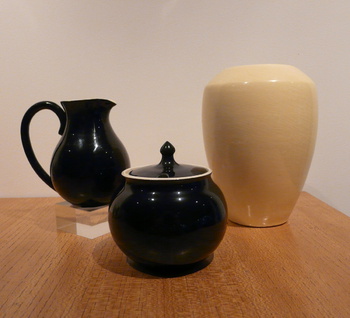 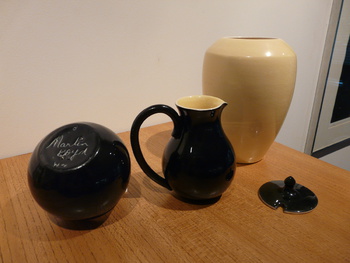 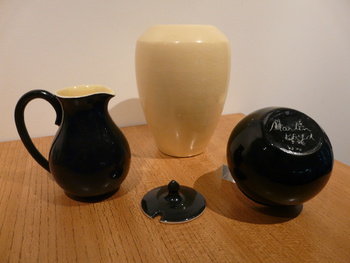 I found the vase last Wednesday. The Harlequin series was really popular here in post World War II Australia. Artists found it difficult to find commissions in an economy still reeling from war. The sculptor Guy Boyd and his brother David turned to skills that their father had taught them as young toddlers.
Martin Boyd pottery was a passion of mine thirty years ago. I only have a couple of pieces left. I moved into other areas of collecting. It also links in with the Commedia Mask of Arlecchino a couple of days ago, I suppose.

Inky this posting is for you!
Check out her fabulous indigenous Martin Boyd items here:
http://www.collectorsweekly.com/stories/51602-more-martin-boyd?in=user

"The business that became known as the Martin Boyd Pottery was first set up in 1946 by Guy Boyd (son of the Victorian potter Merric Boyd) while he was an art student at East Sydney Technical College. The Pottery operated from a house in Waters Road, Cremorne, which he shared with Norma Flegg and her husband, Leonard. A student by day, Guy Boyd threw pots at night, with Norma firing the kiln as well as taking on much of the decorating. In the early days of the business additional decorating work was undertaken by contract workers who included Guy's brother, David, Hermia Lloyd Jones (later Hermia Boyd) and Peter Rushforth.
As the business continued to grow, Duncan Miller, Guy's army friend and Norma's husband, Leonard, became involved with the running of the Pottery. In 1948 with Guy Boyd, Norma and Leonard Flegg and Duncan Miller as business partners, 'The Martin Boyd Pottery' was registered as a business name. To cope with the Pottery's continuing expansion, premises were also rented at Ocean Street, Woollahra. Duncan Miller ran this site.
In 1949, the Martin Boyd Pottery moved to Princes Street Ryde, when a former bakery was bought for the new Pottery premises. Duncan Miller had left the business by this stage and following Guy Boyd's return to Victoria in early 1951, Ronald Flegg, Leonard's brother, came on board as joint production manager (with Norma) and accountant. Leonard took care of sales and some of the bookkeeping.
Using techniques such as wheel throwing, jigger jolleying, moulds and slipcasting, the Pottery took orders for a wide variety of domestic items which included: -ashtrays (in square, contoured, Mexican hat and boomerang shapes), beer mugs, ramekins, egg cups, biscuit barrels, honey pots, fruit bowls, 15 piece coffee sets, 30 piece luncheon sets, flower pots in various sizes and lamp bases.
By August, 1956, the Martin Boyd Pottery had a range of 177 items on their Price List, many of which were available with any of the following decorations :-'Underglaze Hand painted Decorations (Figures, Scenes etc.)' 'Harlequin Ware - 2 tone (where applicable)' or 'Underglaze Hand-painted Abstract Designs'."