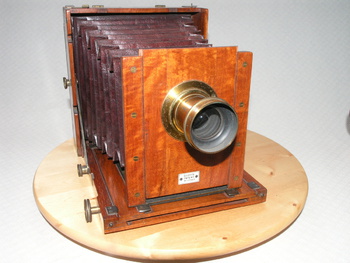 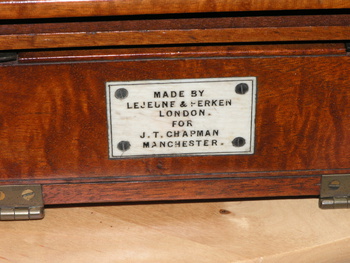 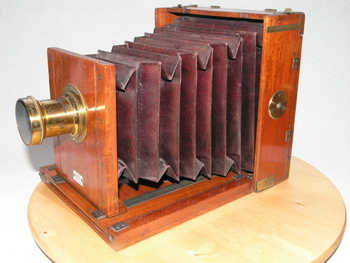 Lejeune and Perken | Scott's Patent Camera. | 1887 | Half Plate.
Catalogue No. 0235.
Labelled "Made by Lejeune & Perken, London, for J.T.Chapman, Manchester.", this camera has also another, inset label saying "Scott's Patent, No. 12389". Lejeune & Perken established 1852, changed the name of their business in 1887 to Perken, Son & Rayment. C.E.Scott, manufacturing in Manchester, is presumed to have made the Scott's Patent Cameras offered for sale in Chapman's 1888 catalogue, and Chapman is known to have had cameras made to his own designs, but how Lejeune & Perken, as well as J.L. Lane & Sons, in London, (q.v.) came to be making Scott's Patent cameras for Chapman to retail in Manchester, is not known. The labelling once again establishes the fact that Chapman was buying in cameras from other than Manchester manufacturers, for retail in his Albert Square premises, to which he moved in 1883 from his Deansgate shop. The firm of J.L.Lane also changed their title, adding "& Sons" around 1887, which is where I have dated this camera.