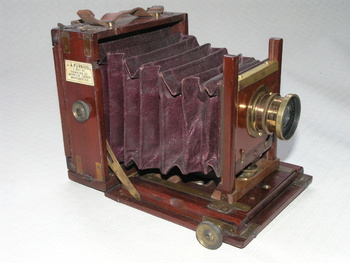 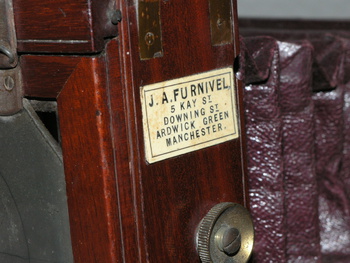 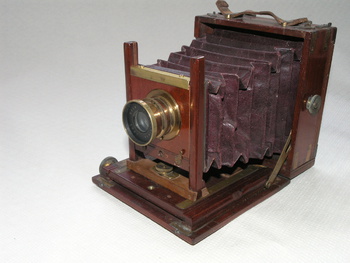 Furnivel, James. A. | Unnamed. | 1875. | English Field Camera. | Quarter Plate.
Catalogue No. 0217.
A brass-bound and dovetailed, self-casing, double extension quarter plate camera, labelled "J.A. Furnivel, 5 Kay St., Downing St., Ardwick Green, Manchester." Some sources have him as "James Furnival", with an "a", a more usual version of the name. Furnivel was in business as a maker of clock cases from 1855, but began camera making about 1857, when he was making camera cabinet work for J.B. Dancer, an early Manchester photographer. The camera has been roughly handled at some time in its long life, resulting in a cracked baseboard which someone has repaired quite roughly. I can think of no rational explanation for the five random holes that somebody has drilled through the baseboard, but the camera has been left as I found it, apart from a mild clean up. I have only ever seen one other, and am never expecting to see a third one.