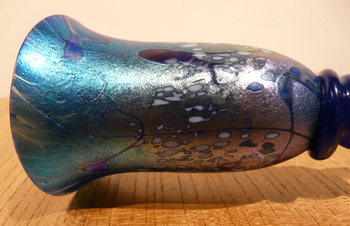 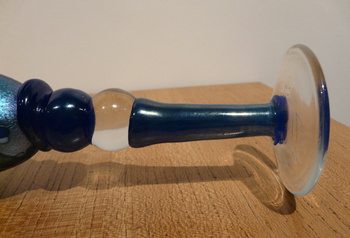 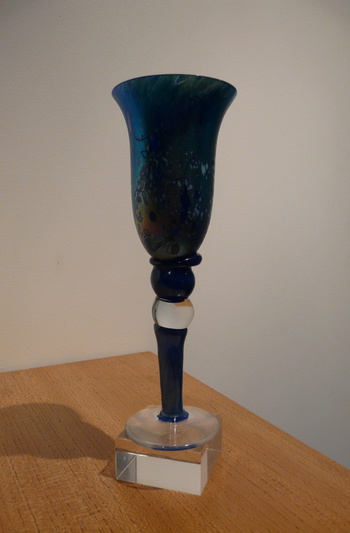 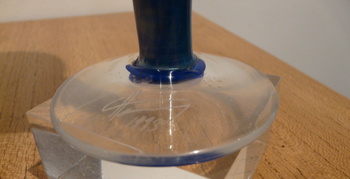 The goblet arrived home last week. I have seen these around for years but had never been able to get one "at the right price".... until last Wednesday. As such it is an example of the work of a respected studio-glass artist. Heaney is Canadian born but has been in Australia since 1967 when he arrived here on a surf trip. "He soon discovered the beautiful surf town of Byron Bay in northern New South Wales. With fantastic surf breaks, pristine rainforest, and one of the most sustained counter-culture communities in Australia, Colin soon settled in the area, embracing the Byron way of life.

Colin experimented artistically with an array of varying dimensional forms, including wax metals, stone and many found objects. He then launched into glass design, virtually teaching himself to blow and manipulate hot glass; his instantaneous spirit evident in all of his pieces."
http://www.destinationsmag.com.au/News-&-Reviews/Dec-2011/Colin-Heaney.html

His first commission in 1983, to make imaginative wine glasses for a Brisbane restaurant, "The Cat's Tango", in St. Lucia and that theme has continued in other commissions from restaurateurs who admire Heaney's style including, in 1991, Michel Roux's Waterside Inn at Bray, outside London. His exhibition at the Australian Craftworks Gallery in Sydney, in 1993, featured a large collection of individually created glasses that were 'really fun to make'. I think this glass may well have come from that exhibition.

Heaney's work is held by private collectors all over the world and is featured in many public collections around Australia and overseas in Spain (a result of being exhibited at World Expo in Seville, in 1992) and Denmark. in 1993 he had shows in Sydney, Melbourne, Hong Kong and Florida.

This goblet is unusual for the double balls that have been inserted into the stem.