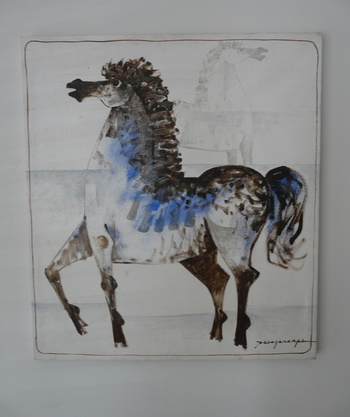 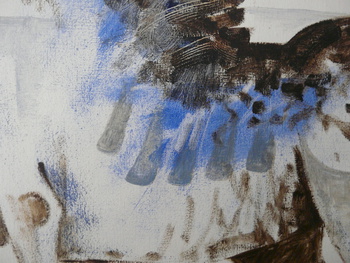 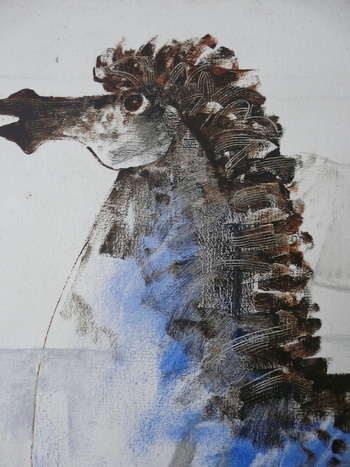 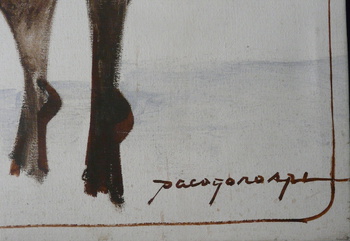 An oil painting found yesterday at the Salvos here in Sydney. I was surprised to find out that it was indeed an original and not a print. I had no idea about the artist until I got home and had a look on the net. It looked European and the signature began with Paco so I was thinking Spain, etc. I lugged it up to the supermarket with my shopping trolley. No car. I did the shopping with it and met up with a dealer mate heading for the same store I'd just left. He liked it and so I headed home with the painting, three bags of groceries and the trolley full as well.
My partner was not as enthused as I with it!
I needed to find out more to justify my position. It reminded me of those modernist ceramic horses by Aldo Londi for Bitossi in Italy, Gus McLaren here in Australia. I liked the sgraffito work on the mane and the painting was loose, almost calligraphic. The look in the eyes! Those splashes of blue/grey!

The signature was Paco Gorospe or was it Garaspe? I went online and came up with lots os examples of the signature Paco Gorospe. It seems Paco was the nickname of Francisco Gorospe Sy ( 1939 - 2002), a Filipino artist from Manila. He was prolific and made his living by selling art inspired by personal experiences in Manila and in the southern areas of Visayas and Mindanao. Sometimes there were dates with the signature. There is no frame and no mention of a gallery on the rear of the canvas.

From 1961 until 1965 his paintings were patronized by Lyd Arguilla at the Philippine Art Gallery and sold in the United States. Paco´s works were chosen to represent the Philippines in 1962 at the Washington World Fair and in 1964 his painting were exhibited at the New York World Fair. From 1965 onwards, Paco had successful exhibitions in Bern, Switzerland and a one man show at the President’s Hotel in Hongkong. The Karilagan Finishing School also featured Paco´s paintings. In 1972 he hold an exhibition in Okinawa, Japan.
In 1974 after an interview with Paco, Gilbert Luis R. Centina III stated in his article Paco from the Ermita School: “His lines are impressionistic expressionist, representational. His colors are burst of green, orange, blue and brown, his signature is Paco, simply, but his name is Francisco Gorospe Sy - painter of brilliance - from the Ermita School.”
In 1989 he held his first exhibition in Baden-Baden, Germany sponsored by a German friend, and later as well in Denmark. In 1990 his paintings were exhibited yet again at the Expo in Yokohama, Japan.