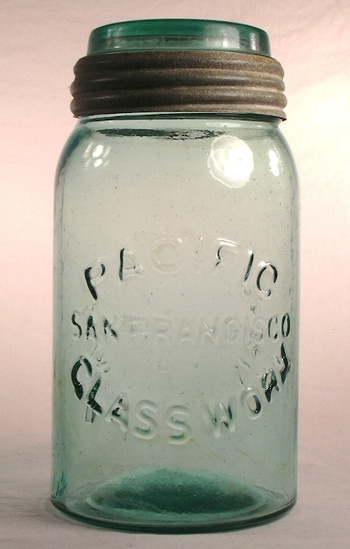 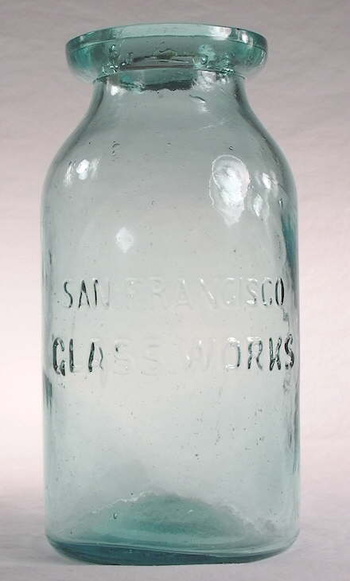 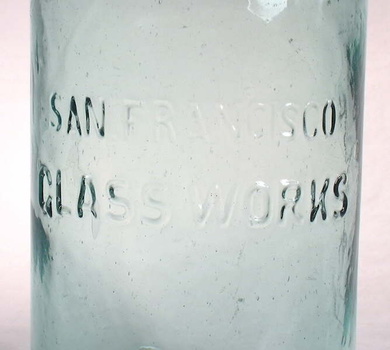 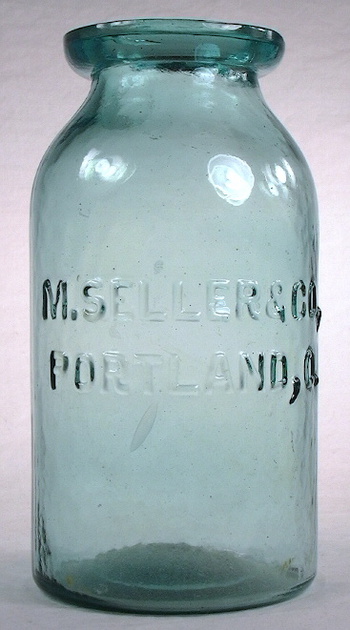 One of the exceptions to the above is that there are a few late 1860s to 1870s era jars that have the full glass makers names boldly embossed on them. The first image is of a quart jar embossed with PACIFIC / SAN FRANCISCO / GLASS WORK. The "S" is missing from the WORK(S); another variety has the "S" present. The reverse side is embossed with VICTORY - the patented jar type - along with a couple patent dates in the mid-1860s. This is a ground top, externally screw threaded jar (similar to the famous Mason's patent jars) that utilized a zinc band to hold down the slightly cupped glass lid.

According to Dave Hinson's excellent article on the subject (URL at the bottom), the Pacific Glass Works (PGW) was founded in 1862, first blew bottles in 1863 and operated under that name until merger with the San Francisco Glass Works in 1876. The jars date primarily from the late 1860s to 1870s most likely. The PGW also produced a blob soda bottle with the full company name spelled out on the base.

The second (quart jar) and third (close-up of the embossing) images are of the "groove-ring wax seal" (sealed with a tin lid and wax in the groove ring lip or finish) jar that is embossed with SAN FRANCISCO / GLASS WORKS. The molds for these jars (quart and half gallon sizes) was a reworking of the original CUTTING & CO. / SAN FRANCISCO molds, with the CUTTING & CO. embossing being covered over ("slugged out" in collector terminology) and GLASS WORKS added below the SAN FRANCISCO. Resourceful way to reuse the mold, eh?

(Incidentally, the mold engraver who added the GLASS WORKS to this jar [who was not the original mold engraver] was the famous - though whose name is now lost to history - machinist who used a uniquely distinctive "curved R," which marks his mold work - some hundreds of different molds and bottles used in the West from about 1870 to the mid-1880s - to this day as his own.)

Anyway, that glass works (SFGW) was founded (under that name) in 1869 and merged with the PGW as noted above. The SFGW also produced at least one soda bottle with the same embossing on the body. (Note: Baker, Cutting & Co. was in business in 1859 to 1860 or so; the jars with that embossing are even rarer than the SFGW jars which are rare.)

It is almost certain that the above noted jars were produced by the combined glass company - the San Francisco & Pacific Glass Works (SF&PGW) - using the same molds until the early 1880s. Interestingly enough, at some point (probably early 1880s) the two SFGW jar molds were reworked with the SFGW embossing "slugged out" entirely and the previously blank back half of the mold engraved with M. SELLER & CO. / PORTLAND, O. to fill an order for that company. These jars were blown by the SF&PGW and created the only wax seal fruit jar in the West outside of the couple noted in California...and very rare jars they are indeed.

...and if that weren't enough, the mold engraver for the Seller's jar was also the famous - but totally anonymous - "curved R" mold engraver of Western collector fame...