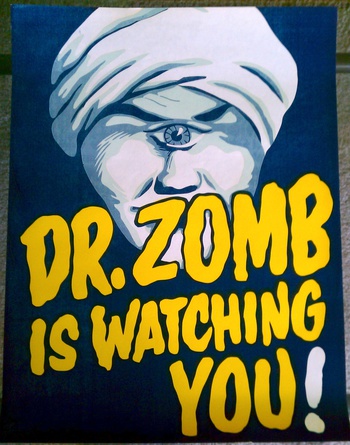 This is an original 1960 Dr. Zomb offset from my private collection of Magic posters, it measures approximately 14" x 20" and is in A+ condition.

From 1947 to 1954, Ormond McGill performed hypnotism and magic under the stage name of Dr. Zomb. His "Séance of Wonders" show featured horror-themed routines and costumed assistants typical of the midnight "Spook Shows" which were popular during that era. In addition to his career as a world-traveling magician and stage hypnotist, McGill was also a skilled hypnotherapist and a student of Eastern mysticism.

Ormond McGill made many of his greatest insights in recent years. He has combined his profound mastery of many hypnotic techniques; his deep personal understanding of Eastern systems of meditation, mysticism, wisdom and healing; and his creativity, vision, compassion, humor and life experience. Known as “The Dean of American Hypnotism”, Ormond McGill continued to teach courses and lecture right up until a few days before his death. He passed away on October 19, 2005 in town where he was born – Palo Alto, California. His best piece of advice: "Make life your playground, not your battlefield."