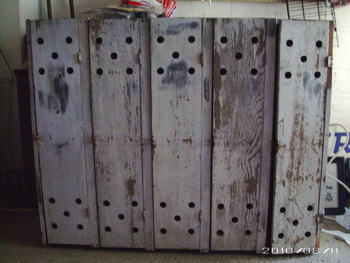 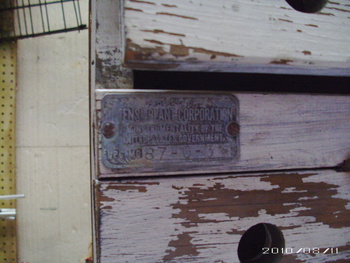 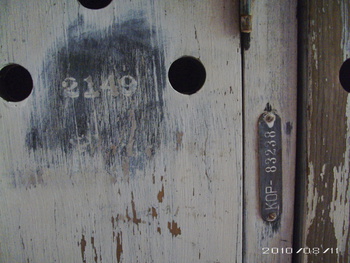 I found this set of old lockers at the Antique Extravaganza and Fleamarket held every May and September at the Clark County Fairgrounds in Springfield, Ohio. A lady was set up inside one of the buildings on the gorgeous May day so needless to say she wasn't seeing much action. I spotted the lockers and decided to take a closer look. When I approached them the lady began to tell me that they were a set of military lockers that she had acquired from an auction. She pointed out that all of the original government issue tags were still attached though they were hard to see for all of the paint that coated them. I knew these were special and had to have them so I took a step back to make an offer. Before I had a chance to open my mouth the lady started spouting out numbers trying to get me to buy them. Next thing I new she threw out a crazy low number and SOLD! was the next word out of my mouth. My husband and I took them home where I used rubbing alcohol to remove the paint from over the GI tags and over 2 of the numbers that were still intact on the doors. Someone has removed the dividers from the inside and put a back on them but the hooks for hanging are still inside. I got an idea of their age from my dad. He said these were similar to ones he had to use when he enlisted in the Air Force in the 50's. I love these lockers. They are still totally functional and they have a history to them that you can feel when you run your hands across the wood. You can just imagine the emotions, blood, sweat, and tears of the soldiers that used these lockers. The grain of the wood tells the story. I hope you find these as interesting as I do.