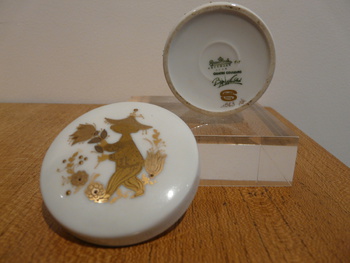 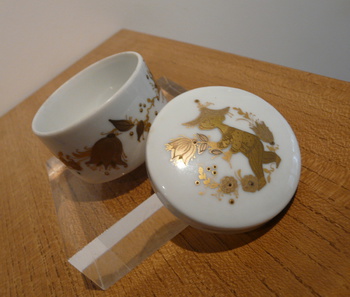 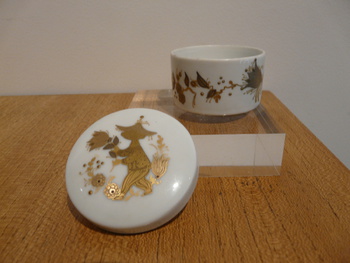 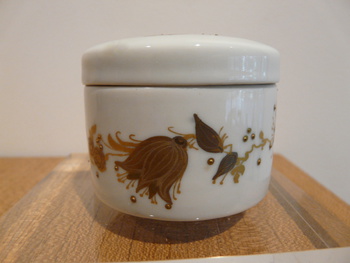 Another market find a few years back is this little lidded pot part of the Studio-Linie 'Quatre Couleurs' designed by the legendary Danish designer, Bjorn Wiinblad 1918 – 2006 (pronounced Byurn Veenblahd - it seems).

Wiinblad studied at Copenhagen's Technical High School and the RDA, and at the Lars Syberg Studio, Taastrup.
He is known for his design skills in not only ceramics but furniture, glass, illustration, theatre, textiles and posters. He has achieved popular acclaim for his work with Nymølle from 1946 to 1956 and Rosenthal in Selb, Bavaria, Germany from 1957 to the late 1970s. His work became popular throughout Europe, Asia and particularly in the United States.
On the crisp white Rosenthal porcelain ground, the design on the lid of this pill box is of an "oriental" figure walking in a garden, holding a tulip flower in his hand. Spring leaves and flowers adorn the edges of the pill box..

The underside of the vase is fully marked to the base with the green Rosenthal crown mark, a dot before Germany = 1965 and an overglaze gilt Studio Linie “S” mark . I think there is a gilder’s mark as well as a number for “Quatre Couleurs” 1583. The French term refers to a decorative technique using four types of gold: I think they are green gold, yellow gold, red gold, and ducat gold. The decorative effect is achieved by burnishing the gold as each gold alloy is applied separately by hand.

The original Studio Linie slogan: ”Originals of our time”.