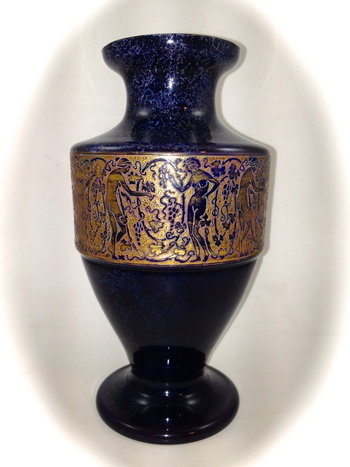 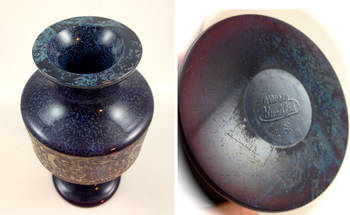 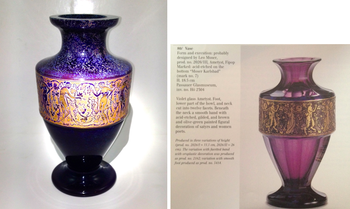 This is a rare one - a Moser signed vase in oroplastic decoration that is not facet cut, resulting in a very thick-walled vessel, made to look like stone with a mottled outer layer made in a process that I am unfamiliar with - it resembles lithyalin glass. The ground is a very deep ruby color (possibly Royalit or Rubin). Photo number 2 shows a closeup of the wall of the vase through which I have shone an extremely bright white LED flashlight, which gives a good idea of the true color of the glass beneath the surface. I believe this is prod. no. 5414/III (18.5 cm) based on a comparison to a facet cut vessel shown in Moser 1857-1997 (published by the factory). A scan is shown in the last photo. Note that the vessel includes a similar vineyard theme, but this vessel has the nude forms of a man and woman rather than the satyr and woman with long, flowing dress shown in the scan.

I contacted the Moser factory, whose historian confirmed the year of production (1929) and named the designer as Mr. Heinrich Sattler (confirming my initial thoughts about this piece), although the Moser factory book says that the form and execution of the similarly-themed facet cut piece is "probably designed by Leo Moser".