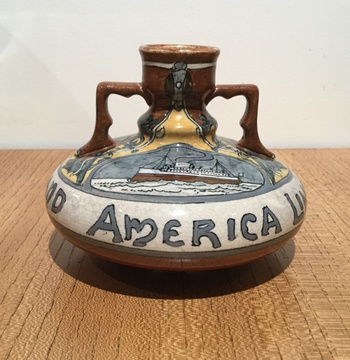 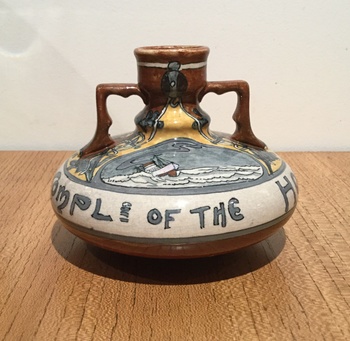 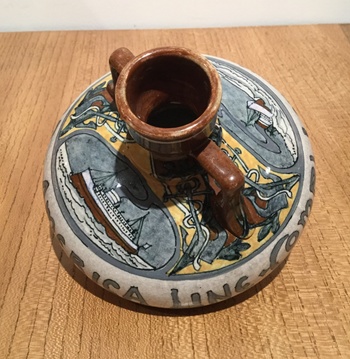 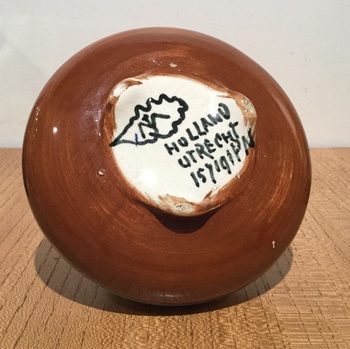 This little vase came home a month ago from the Collector’s Fair here in Sydney, Australia. When I got it home I had to remove some wax that had been left within the vase. The large piece of wax just needed to be broken down carefully into pieces for removal. You could hear the wax within the vase, which fortunately had not been damaged. The dealer told me that he thought the former owners had been using it as a ‘kandelaar’ or candlestick. It was not cheap but I wanted a piece by this company from Utrecht. The company is called “Aardewerkfabriek Fayence-en Tegelfabriek Holland” set up in Utrecht, Holland by Jan Willem Mijnlieff in 1894. I recognized the the leaf and JM signature on the bottom of the piece as being that of Jan Mijnlieff.
The Aardewerkfabriek Fayence-en Tegelfabriek Utrecht was part of a surge of art pottery production in the late nineteenth century in Holland that spawned some famous companies: de Wed. N.S.A. Brantjes en Co (1895, in Purmerend), De Distel (1895, in Amsterdam), Lotus (1896, in Watergraafsmeer), De Plateelbakkerij Delft (1897, in Amsterdam), and Zuid-Holland (1898, in Gouda). They were riding on the success of two major companies: de Porceleyne Fles (in Delft) and the famous de Haagse Plateelbakkerij Rozenburg (1883, in the Hague). Mijnlieff began his operation by employing three experienced painters and designers from Rozenburg: William Scherjon, Johannes Karel Leurs and Jan Karel Heijtze.
A lot of the early production focused on tile production for the luxury interiors market with tiles designed by Jac. Van den Bosch for 't Binnenhuis. The factory however was in decline by 1905 and they did work as special commisions and advertising items for business firms. The company finally closed in 1918.

They did work for the Holland America line for a short period I believe in 1905 to 1906. I love the Art Nouveau design of the little vase especially those handles and the three little pinched feet give it an extra height, as well. The painting of the ships from the Holland America line also has that Art Nouveau feel to it with the whiplash borders created from the smoke from the funnels, the four anchors to the side of the handles and lettering: all hand done! It is small only 10 cm tall.

"Compl's of the Holland America Line". I wonder who it was that was given this piece of "aardewerk", aboard which ship and whether in 1905 or 1906?

The mark is the leaf and JM Holland Utrecht 157191PN. If you have any more information about the piece I would appreciate your help.

Check out these Mijnlieff items from the Utrecht Museum:
http://centraalmuseum.nl/ontdekken/object/?q=&fct=creators:Aardewerkfabriek%20Fayence-%20en%20Tegelfabriek%20Holland&sort=richness&img_only=1