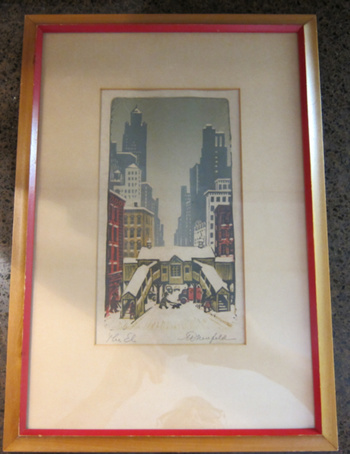 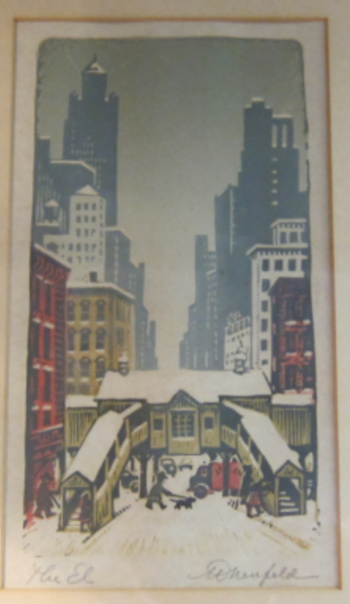 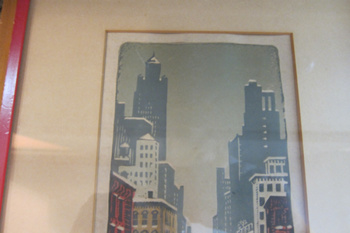 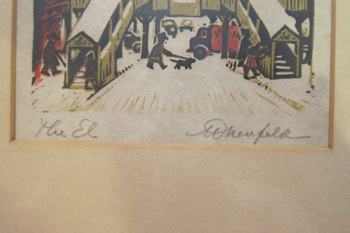 Please note that this is not the common

El Station at Hannover Square
The El, short for "elevated" is the rapid transit system serving city of Chicago, IL.

Framed and Matted but will need to be redone

Woldemar Neufeld was born on November 10, 1909 in Waldheim, a village of German speaking Mennonites in the south of Russia. Although his earliest artistic efforts often centered on imitating the bridge building designs of his engineer father, or the farm implement machinery produced by his industrialist grandfather, he also studied in the use of oils and watercolors when he was a teenager.

Following the trauma of his father's political execution in 1920, and his mother's marriage to a leading Mennonite bishop and man of letters, Woldemar fled with his new enlarged family from Russia to Canada. He arrived in Waterloo as a boy of fifteen, just after Christmas Day in 1924, and began a relationship with Waterloo and the surrounding cities, towns and countryside that he has woven into his artistic career for more than 60 years.

From 1927 to 1930 Neufeld studied at Waterloo College School, a prep school in Canada, taught mainly by Lutheran seminarians, on what is now the Wilfrid Laurier University campus. In 1931, he helped to found the Art Society of Kitchener. In 1932 and 1933, he studied in evening classes at the Ontario College of Art in Toronto; that same year, he established his own art studio in an unheated room on the second floor of 62 King street south in Waterloo.

After one-man shows in Kitchener and Waterloo in 1934 and 1935, Neufeld left Canada, and from 1935 to 1939 studied at the Cleveland Institute of Art, where upon graduation he won the prestigious Agnes Gund Scholarship. In September 1939 he married Peggy Conrad -a 1937 graduate of what is now Wilfrid Laurier University -in the Waterloo College Chapel, and spent his scholarship money on a honeymoon.

In 1941 he received his Bachelor of Science degree in Art Education from Case Western Reserve University, and in 1945 moved from Cleveland to New York City, becoming known in the latter as '. Artist Laureate of the East River" for his expressionistic and exuberant birds, tugboats and waterscapes. There he began a new phase of his career, as a New York City and New England States artist, Between 1945 and 1948 Neufeld had a summer studio on Painter Hill Road, Roxbury, CT. During this time he explored the backcountry roads and painted the surrounding landscapes. This allowed his family escape from the hot summer heat of New York City. The seductive quality of Connecticut hills lured Neufeld, and by 1949 he established a studio and art school in New Milford, Connecticut. He continued to maintain his studio in New York City until 1980

Over the past 60 years, Neufeld has painted in many parts of Canada. Twenty-five years ago, he committed himself with renewed vigor to painting Waterloo and the surrounding area. He gathered new material on the annual trips he made there while visiting friends and relatives, and further developed some of the sketches he had made in the 1930's and 1940's as well. Following some of his interest as a child, he has not overlooked the beautiful bridges, which grace the countryside around Waterloo -or the bridges right near his home. He has depicted 65 bridges crossing the Housatonic River through Connecticut and Massachusetts; several of those in the series hang at the Cornwall Bridge headquarters of the Housatonic Valley Association.

Neufeld has been a dedicated print maker since the 1920's, and has been active in the Society of American Graphic Artists. He is a sculptor too, but he is best known for his watercolors and oils -lively, vigorous, buoyant work, joyously blending abstract form with realistic details of the specific places around him. His work hangs in many private collections and many prominent public museums and galleries in Canada and the United States. The City of Waterloo, and Conrad Grebel College hold collections of his work; It has been published in 1982 and 1986 art books; Waterloo Portfolio and Waterloo County Landscapes. Neufeld received an honorary doctorate of letters from Wilfrid Laurier University in 1988.

Wilfrid Laurier University has acquired more than 300 of Neufeld's paintings, which form the nucleus of the collection of the new Woldemar Neufeld Gallery.