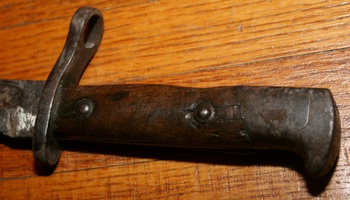 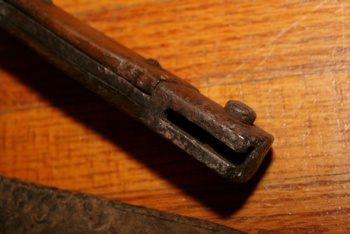 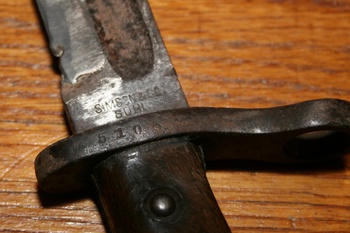 This is a WWI era Simson Co & Suhl German bayonet with a leather scabbard. Simson & Co. was founded in 1856 in Suhl, Germany. During WWI they produced Mauser rifles for the German army. They made very fine sporting arms before WWI & up to the beginning of WWII. In 1936 the Jewish Simson family was forced to flee the country because of Hitler's dictatorship. The Nazi's then took over the company. Following WWII the company was briefly returned to the Simson family, but again seized, this time by the East German authorities.

The bayonet is marked "M5106" on the guard. The ricasso is marked "Simson Co & Suhl. The bayonet appears to be a variation of the Mauser 1895 bayonet which fit the 1895 Mauser rifle.