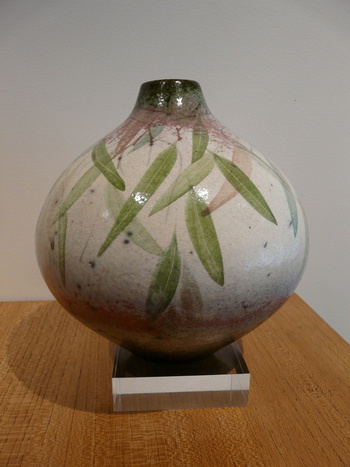 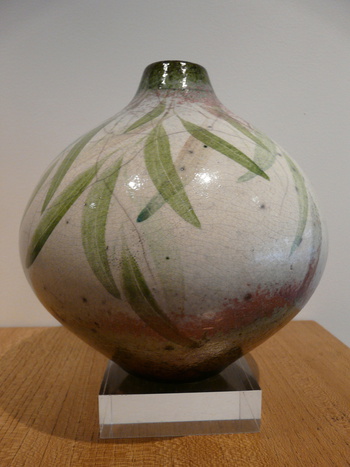 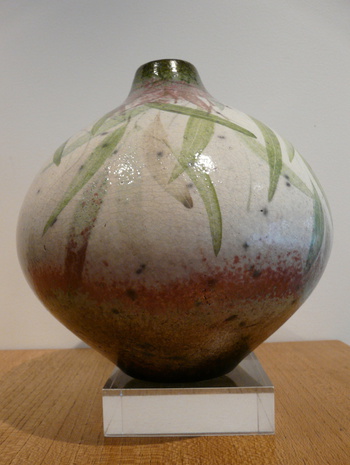 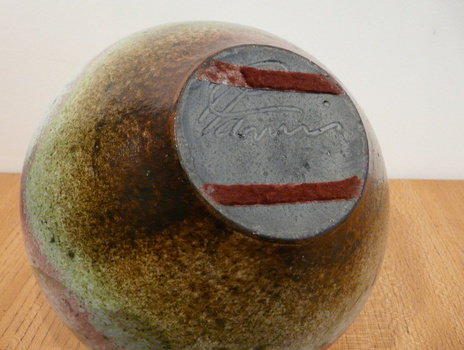 PETER HARRIS 1980s vase with hand-painted gum leaf decoration using copper and iron oxides and then raku fired. A Kirribilli find in the good ol' days (the early nineties) when that market still provided some treasures: these days it has been taken over by the 'vintage clothing' brigade/hordes. All these people looking in vain for a Hermès Birkin bag!

The market used to be under the northern pylons of the Sydney Harbour Bridge and you had a view looking over to the Opera House if the goodies weren't there. A woman sold me this pot cheaply and said "I won't tell you how much I paid for this new" at a gallery in South Australia. It was only about five years later.

I had picked up a few Raku pieces in those days. I was particularly fond of the shapes of raku pots and liked the glaze effects. This was an interesting example of a landscape painted on a raku pot. The form and the green glaze reminded me of another potter Jeff Mincham. But the landscape suggested a bushfire to me and the gum leaves that surrounded the vase seemed to be burnt into the form - perhaps by the bushfire itself. It was a way of looking at the raku process: primitive, basic, primitive pit firing, wood chips ..... an extension of the natural effects of fire on clay. I loved it!

Later I found out that Peter Harris had been taught by Jeff Mincham:

"Peter Harris is a self-taught South Australian potter with a background in painting. He became interested in making pottery in 1975, first making terracotta garden pots then decorative stoneware and porcelain. His wife Carolanne Wasley was teaching the craft certificate course in ceramics at Clare TAFE and had set up the Halsbury Pottery, where they exhibited together. He was inspired by a Jeff Mincham workshop in 1982 to specialise in raku. In 1985, he set up a studio with potter Sam Keane in Hahndorf. In 1991 he moved to Noosa, in Queensland. In 1994-95 he spent six months travelling through West Africa. He currently maintains a studio in Cooran, QLD, producing sculpture and decorative pottery, teaching visual arts at Gympie TAFE, and painting again. His works are incised 'PHarris' with the P and H entwined."