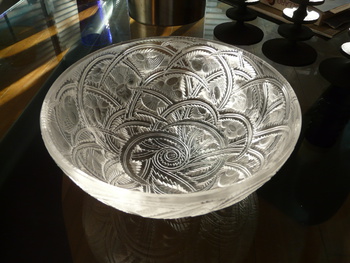 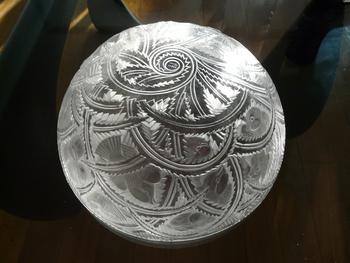 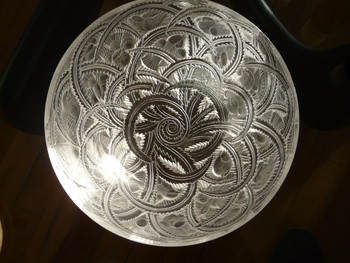 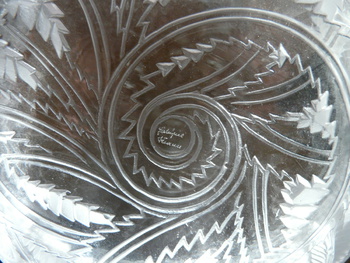 Sometimes it pays to change your hunting patterns. Last Friday I decided to go out on the hunt but headed in another direction. I came across a Vinnies that normally has nothing to buy. I saw a bowl on the shelves behind the counter and had a double-take. It was surrounded by a lot of what I call "Blue Label Bohemia Cut Crystal" but it stood out.

It is a later production piece by Lalique in the "Pinsons" pattern (originally designed by René Lalique in 1933 and launched again for production in 1951). So far I think I have counted twenty two little finches that inhabit the brambles. There is not a berry to be seen! They have eaten them all for sure! They all have a mischievous look on their faces. I reckon they are ready to pounce on anything tempting placed in the bowl. Perhaps it's an encouragement to keep the bowl clear of anything that might attract their attention? The zig-zagged brambles of a black-berry bush are highlighted by the jagged edges of the leaves: the bowl is a real 'touchy-feely' because of the amazing quality of the moulded decoration. The exterior of the bowl has a frosted finish highlighting the individual birds against the jagged leaves and bramble vine.

The mark is a just the two line script mark of Lalique / France. Within the bowl is the remnant of the Lalique sticker that can be felt but is unseen. The printing and gilding of that sticker wore off long ago. It's a very successful production piece and is still available. I now have a modern piece to complement the Gui bowl that was made by Lalique in the 1920's.
http://www.collectorsweekly.com/stories/24816-my-lalique-gui-bowl

I'm off to find something else! 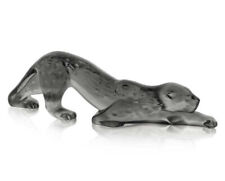 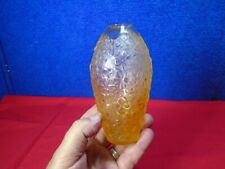