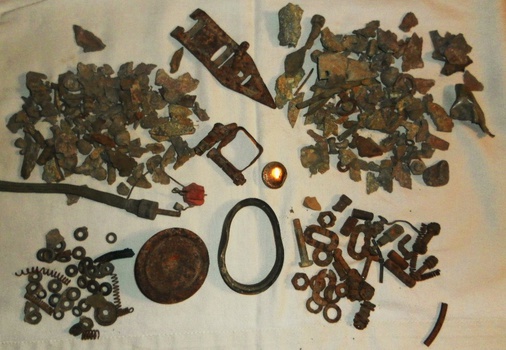 These items were found south of San Antonio Tx . The first pieces found was the engine valve and brass seat. Then the larger iron parts(top middle) were found. The remaining parts were found by sifting the earth in an area about 4 feet in diameter. many of the aluminum pieces were melted. Parts were dug in about 1956 and found with my first metal detector. By using the piece of piston ring it was determined that the cylinder bore was about 5" in diameter. valve is 2.6 " dia . Depth was about 8 to 10 inches deep. The bright knob in the center of the picture is marked ,The Lunkenheimer Co , Sept 18 1917 . It is broken off and has a dent on one side.
I visited several families that said they have been living near by since early 40's and none remember a plane crash nearby.