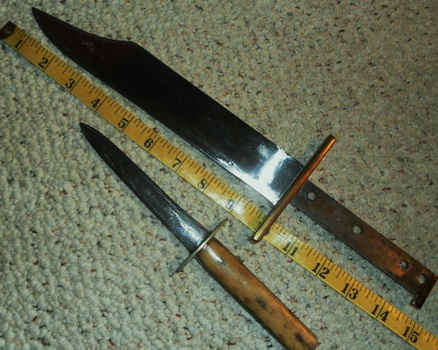 The small knife or dirk was made by an Uncle in the early 30's handle is bone. The blade is very hard steel. He passed away in the mid 30's. It was given to me by my father.
The longer knife is a dug item. The entire blade was heavily and deeply rusted. I had the blade surface ground and polished. The blade is so shiny that I could not get a good picture of it. Part of the blade shows the shiny surface. OSPHO removed rust from the lower part. Not as rusted as the blade.There was no id on it. The handle area had some type of thin wood wrapped with thin rawhide and overwrapped with leather . Something had eaten most of the hide and wood was rotted and decomposed. I had 3 holes drilled to fasten a handle. Decided against using screws to mount a handle The lower hole was already there. The crossbar is brass and fits tightly but can be removed. Brass parts were soldered on. Heating them caused them to slide off.
The upper curved part of the blade is as sharp as the main blade.
There is still pits showing at the upper tip end too deep to remove. I plan on keeping it after I have worked on it.
The blade is very hard metal and holds an edge very well. No signs of it being damascus. removing the rust made the blade thinner but I want to use it not preserve value if any. It is a very interesting design to me
***********
I have since restored this knife .The base of the handle is brass which I attached using TIX low temp solder. I then placed a thick piece of wet leather to both sides of the handle and wrapped it with thin wet rawhide and allowed it to dry in the sun. 98 degree temperature for a day which dried it out. I then tightly wrapped the handle with a leather cord 1/8"x 1/8" dampened slightly and allowed it to dry in the sun. The handle fits my hand well and does not slip in my grasp. The blade both main edge and top curved portion are sharp enough easily cut paper. I was chopping into a piece of wood and hit a nail ( slightly thicker than a small match) and it was cut thru and no damage was done to the blade. It was sharpened with a diamond surfaced file. and finished by a friend if mine who had a synthetic ruby stone.