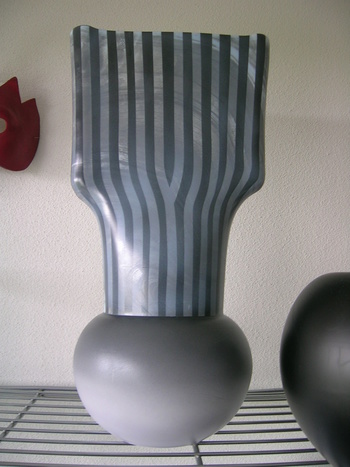 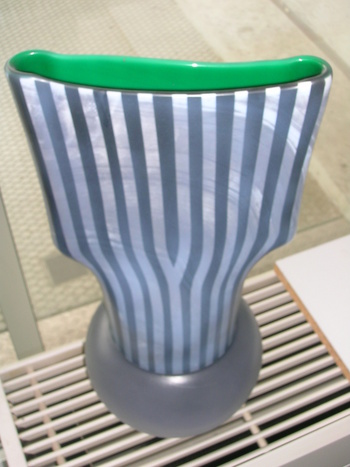 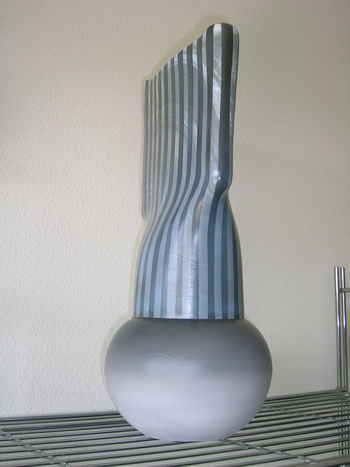 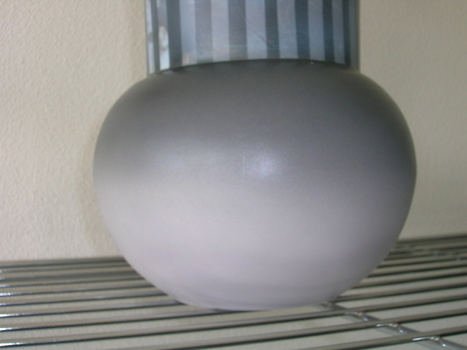 Richard Meitner Kimono serie 41 cm high top 21 cm wide sphere 17 cm diameter Blown and Enameled Glass signed Richard Meitner '91.
All the Kimono objects i find on the net are earlier 84/88 but this can be a later stylized version.A dealer who visited me immediately asked where did you get that Kimono i have been looking for one for ages , I did not what he was talking about but he ment this object so thats why i think its from the Kimono serie.
Meitner studied at the university of califonnia Berkeley 1970-1972
Rijksacademie voor beeldende kunst in amsterdam 1974-1975
Gerrit Rietveld Academie Amsterdam 1972-1975 ( Mieke Groot also studied at the Rietveld during the same periode )

After the rietveld Academie in 1976 started with Mieke Groot a glassstudio in amsterdam were they seperately made their work ,both worked parttime for Leerdam Glass Factory

Meitner exhibitid all over the world and his work is in more than 50 public collections worlwide.His great aunt was Lise Meitner a famous
physicist

In 1997, Meitner mounted an exhibition titled “Cold Fusion” for the Museum Boerhaave in Leiden. The exhibition was dedicated to his great-aunt, Lise Meitner, and it was an attempt to link Meitner’s two great interests: art and science. The Museum Boerhaave is a science museum with an eccentric collection of scientific devices, specimens, measuring instruments, and surgical tools.

The show at the Museum Boerhaave was a perfect opportunity for Meitner to try something new, and something that would involve science. He began to work in borosilicate glass with the help of Edwin Dieperink, a scientific glassmaker. Borosilicate glass (called Pyrex in the United States) is a much harder substance than the soft, soda-lime glass customarily used by artists. Meitner’s objects look like those that might be found in the Museum Boerhaave’s collections, and, like many antique instruments, their function is unclear or perhaps obsolete.

From 1981 to 2000 Head of the glass department off the rietveld academie in amsterdam with Mieke Groot.
He has taught, lectured and conducted workshops in a large number of countries like the US,Great Brittain, Japan ,Italy and many more .

In 2009 there was a solo - exhibition of a large number of his work as 3rd artist in the exhibition series " Masters Off Studio Glass" at the Corning Museum of glass that exhibition travelled in july 2010 to the Tacoma Museum of glass and stayed there till june 2011.
Here is a link to the cataloque of the exhibition http://www.issuu.com/stevenboland/docs/richard_meitner_300.