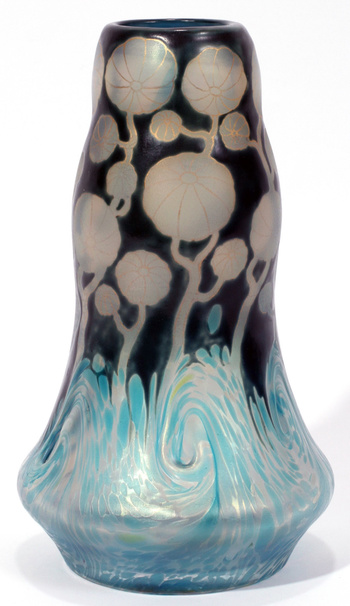 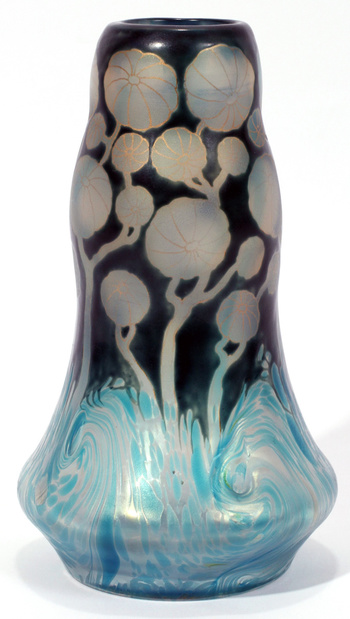 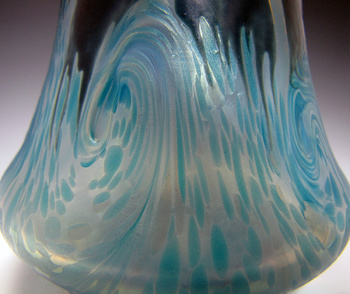 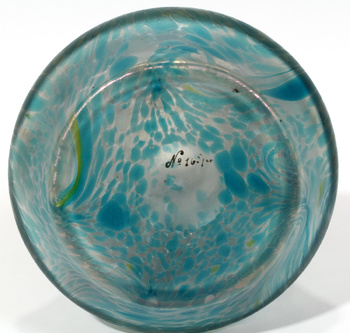 Poschinger seemingly had an endless variety of stylized variations using their helios-type swirl form bottoms, but this is the first I have seen using this "seedpod" motif and blue swirl bottom.

The design on this vase is doubly impressive given that the contours of the seedpods are actually rendered in negative (i.e., it is the background that is enameled, not the seedpods). Additionally, the seedpods have gold line details, which provide definition to the motif.

Correspondence with Christiane Sellner, an expert in Bohemian Jugendstil art glass, yielded additional information about this vase. According to Sellner, the vase form was produced by Poschinger for the Paris World Exposition of 1900, but this fancy enameled version in her opinion dates to between 1904 - 1907. The motif designer of the vase was most likely Karl Schmoll von Eisenwerth, while the vase form itself was a creation of Julius Diez. Sellner mentions in her correspondence, "..there is also an old photo from the Paris 1900 Exposition with this very shape, where both of the artists (Eisenwerth and Diez) are mentioned - perhaps they had developed this shape in a team work?"

The artist Karl Schmoll von Eisenwerth, having studied and lived in Munich, designed for the Poschinger Glashütte Buchenau between 1899 and 1907. In the year 1907, he moved to Stuttgart to teaching at the Technische Hochschule there. Julius Deiz was also a resident of Munich, and in addition to being an early designer for Poschinger, he was well known for his illustration work for the German art publications "Pan" and "Jugend."