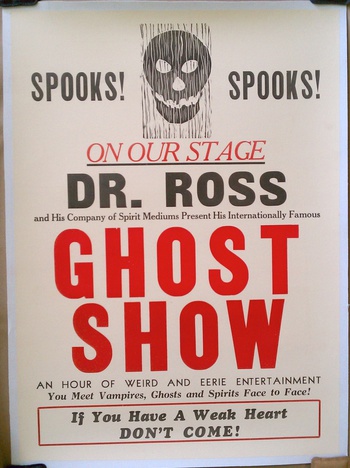 From my private collection of Magic posters, this is an original and rare "Dr. Ross Ghost Show" letterpress poster (circa 1930) it is a 1/2 sheet measuring approximately 23" x 31" and is in "A" condition.

Faucett Ross (aka-Dr. Ross) was a magician in the 1930's who used to perform Spook Shows and work in carnivals during the 30's and 40's. Many professional magicians performed traveling midnight Ghost Shows/Spook Shows from the 1930's to the 1960's. These shows supplemented magician's incomes between large venue Magic performances. Ghost Shows had a long history of entertaining thousands with horror-themed illusions and magical ghostly phenomena, including communications with the dead.