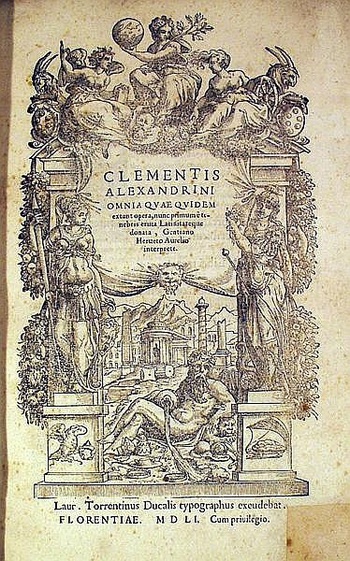 Condition/Details: This antique folio volume is a rare first Latin edition of Titus Flavius Clemens (c.150 - c. 215), known as Clement of Alexandria (to distinguish him from Clement of Rome), a Christian theologian and the head of the noted Catechetical School of Alexandria. Clement is best remembered as the teacher of Origen. He united Greek philosophical traditions with Christian doctrine and valued gnosis that with communion for all people could be held by common Christians specially chosen by God. He used the term "gnostic" for Christians who had attained the deeper teaching of the Logos. He developed a Christian Platonism, and presented the goal of Christian life as deification, identified both as Platonism's assimilation into God and the biblical imitation of God. Like Origen, he arose from Alexandria's Catechetical School and was well versed in pagan literature. Origen succeeded Clement as head of the school. Alexandria had a major Christian community in early Christianity, noted for its scholarship and its high-quality copies of Scripture.

This rare early collection of Clemens' works, edited by Gentiano Herueto Aurelio, is published here in three parts. The volume was brought out by Lawrence Torrentinus, also known as Lorenzo Torrentino, Laurentius Torrentinus, Laurens van den Bleeck (1499-1563), a Dutch-Italian humanist and famous typographer and printer for Cosimo, Duke of Florence. It should be noted that this book is a fine example of the high quality of the work of his company. One cannot but note the fine paper, varied type, sumptuous margins and the generally fine make-up of the page.

The book is in loose parchment covers, with title on spine. The work contains an illustrated title page.