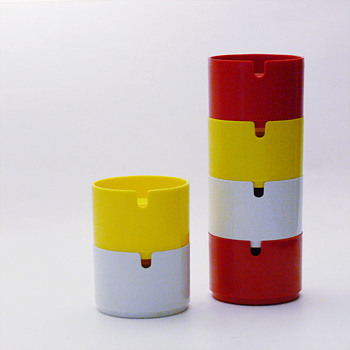 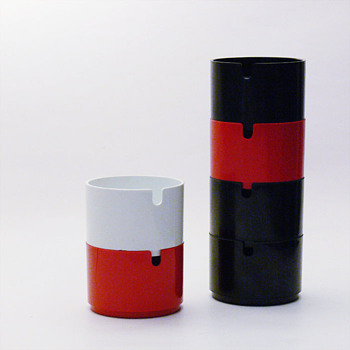 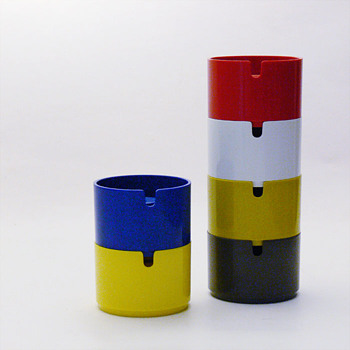 Wow, it's not glass! LOL

Well, I have to say I am not exclusively a glass collector... there's so many things that I like: glass design, chairs, plastic ashtrays... and every item designed by the Spanish designer André Ricard.

I already posted a picture of some of his perfume bottles months ago (http://www.collectorsweekly.com/stories/40559-3-perfume-bottles-andr-ricard-1960s?in=collection-133) and now I've decided to share my Ricard collection with you, so be prepared to see anything from ashtrays to liquor bottles, from perfume bottles to toothbrushes... this is the Ricard univers! I wish I had a more complete collection ashe designed some really incredible items.

The Copenhague ashtrays were designed in 1966 for the Spanish company Flamagás (that made mostly lighters) in a time when smoking was trendy and cool (and in fact during the 60s and 70s ashtrays were one of the coolest things to design in a society that demanded cool shapes for everyday living).

What was new about these ashtrays was the fact of them being stackable (you could create towers of them, combing colours and thus even decorating with them), small (you could take one in your hand and walk around a party), deep (so the ash wouldn't fly from the ashtray when you moved) and had this elevated platform at the centre (so you could extinguish your cigarette easily). They became a total success, selling by the thousands, and that same year Ricard was awarded a Delta de Oro (an annual award given by the Spanish Industrial Design Asociation) for the design of the Copenhague ashtray.

The Copenhague ashtray was the first of a series of ashtrays Ricard designed for the Flamagás company. I'll show those later, but so far I can tell you that three of them were named after Scandinavian capitals (Copenhague, Stockholm and Oslo) as a tribute to Scandinavian design that Ricard admires so much. I personally miss a Helsinki ashtray...

By the way, André Ricard is now 83 and he keeps on designing!

All of them have the factory name on the bottom (as well as its name and that of the designer), so one can really know which one's got - there's no way one can be mistaken about these ashtrays!)