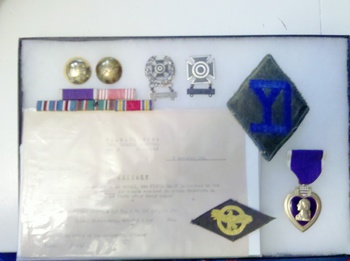 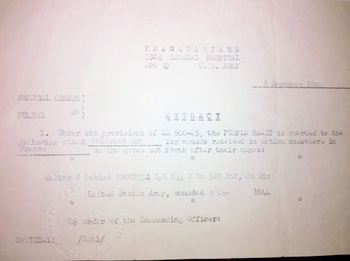 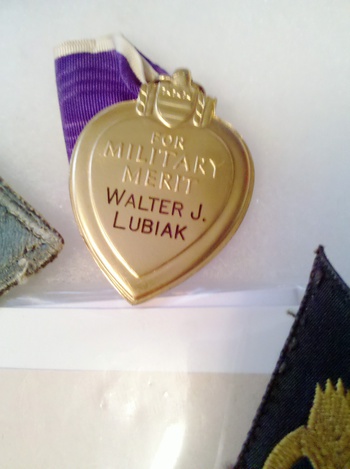 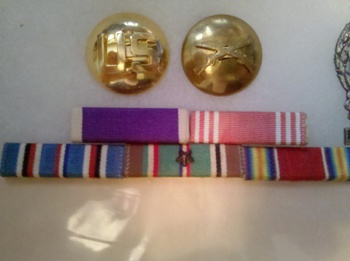 I JUST found this lot surfing the internet last week. Paid $200 dollars for it. Named to a Walter J. Lubiak, of the 2nd Battalion, 328th Infantry, 26th Division. As you can see, the medal is named, and matches the paper work. From what I was able to research, the 26th Division entered WWII late in the war.
This came from an estate on the East Coast, and the seller was from the state of Maine. He said he got this grouping at a barn auction. I think $200 is a fair price for this. I would love to find more information on Mr. Lubiak, as to how he recieved his wounds, where exactly in France was he on Novermber 8th when he did get wounded.
This is what I was able to find on the internet about the 26th Division in WWII. According to the history, the day Mr. Lubiak was wounded was the first day of a BIG PUSH in France against the Germans....SEE BELOW:

A memorial of the division in Moyenvic, France
The division was assigned to III Corps of the Ninth United States Army, Twelfth United States Army Group.[14] It was shipped from the United States directly to France, and was never sent to Britain.[15] The 26th Infantry Division landed in France at Cherbourg and Utah Beach on 7 September 1944, but did not enter combat as a division until a month later. Elements were on patrol duty along the coast from Carteret to Siouville from 13 to 30 September.[16] The 328th Infantry saw action with the 80th Infantry Division from 5 to 15 October.[17] The division was then reassigned to XII Corps of the Third United States Army.[14] On 7 October, the 26th relieved the 4th Armored Division in the Salonnes-Moncourt-Canal du Rhine au Marne sector, and maintained defensive positions. The division launched a limited objective attack on 22 October, in the Moncourt woods. On 8 November, the division went on the offensive, took Dieuze on 20 November, advanced across the Saar River to Saar Union, and captured it on 2 December, after house-to-house fighting. Reaching Maginot fortifications on 5 December, it regrouped, entering Saareguemines on 8 December.[16] Around this time it was reassigned to III Corps.[14]

Rest at Metz was interrupted by the Battle of the Bulge. The division moved north to Luxembourg from 19 to 21 December, to take part in the battle of the Ardennes break-through. It attacked at Rambrouch and Grosbous on 22 December, beat off strong German counterattacks, captured Arsdorf on Christmas Day after heavy fighting, attacked toward the Wiltz River, but was forced to withdraw in the face of determined German resistance. After regrouping on 5–8 January 1945, it attacked again, crossing the Wiltz River on 20 January.[16] The division continued its advance, taking Grumelscheid on 21 January, and crossed the Clerf River on 24 January. The division was reassigned to XX Corps.[14] The division immediately shifted to the east bank of the Saar, and maintained defensive positions in the Saarlautern area from 29 January until 6 March 1945.

Gusen concentration camp
The division's drive to the Rhine River jumped off on 13 March 1945, and carried the division through Merzig from 17 March, to the Rhine by 21 March, and across the Rhine at Oppenheim on 25–26 March.[16] The division was then reassigned to XII Corps.[14] It took part in the house-to-house reduction of Hanau on 28 March, broke out of the Main River bridgehead, drove through Fulda on 1 April, and helped reduce Meiningen on 5 April. Moving southeast into Austria, the division assisted in the capture of Linz, 5 May. It had changed the direction of its advance, and was moving northeast into Czechoslovakia, across the Vlatava River, when the cease-fire order was received.[16] One day later, the division overran the Gusen concentration camp in conjunction with the 11th Armored Division, liberating it from German forces. There, it discovered that the Germans had used forced labor to carve out an elaborate tunnel system with underground aircraft production facilities. SS officers at the camp allegedly planned to demolish the tunnels with the prisoners inside, but the movement of the 26th Infantry and 11th Armored divisions prevented this.