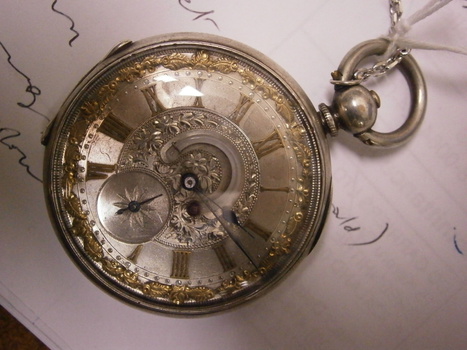 Like Jim, I'm 'long in the tooth' but have never seen one of these before. It's marked Fine Silver above a Crown in the back, keywind obviously, and is engraved T.Cornish, Adelaide (apparently he was a watchmaker who is listed in classified advertising in Australian papers around 1858). The dial is fairly common on these pocket watches but what about the thermometer. I think that it's for decoration/glamming it up rather than being of any practical use as there is no scale associated with it apart from referecing it to the hour markers. The thermometer appears to be alcohol filled rather than mercury and a small bubble in the bulb end appears to be restricting it's 'progress'. I guess those Victorians liked to make their htings look more important than they really were in some cases.
Ross Millar (Cordy's) 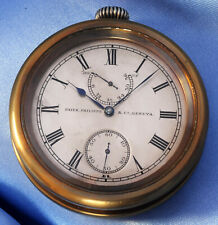