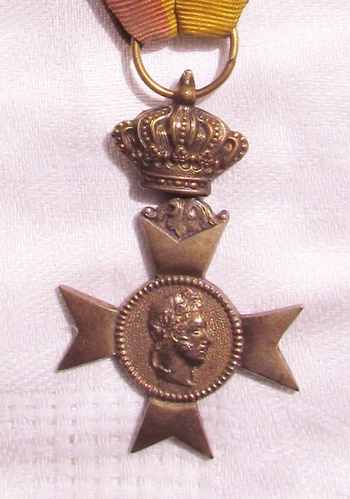 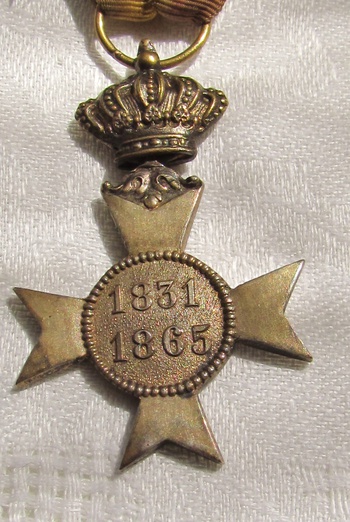 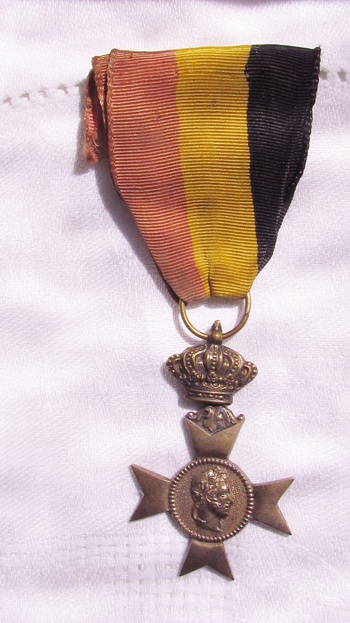 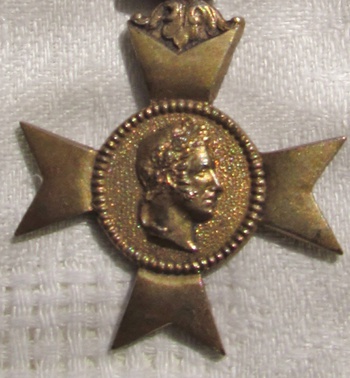 Medal of the Outstanding Philanthropic Society of Former Soldiers (Militia and Voluntary) of Leopold I, Belgium

This beautiful, very rare medal commemorates the Veterans of the Belgian war of independence, both the Militia and Volunteers.

The medal is in the form of a gilt Maltese cross, with an internal central circular medallion. Obverse features the laurel-crowned head-in-profile of King Leopold I. In this form/issue, the King faces right. There is another form of this medal that features a left-facing head-in-profile. On both medals and on both sides, a beaded border encircles the central medallion. Reverse features the dates of Leopold’s reign, 1831 – 1865. Medal features a gilt crown suspension. Faded ribbon represents the national flag of Belgium. Ribbon is very old, possibly original. I do not know the exact date on which this medal was issued. This medal comes from the private collection of Sir William Simpson, O.B.E., retired RAF Wing Commander.

The Belgians declared their independence from the Netherlands on 4 October 1830. Shortly after declaration, the Belgian National Congress considered several candidates for the position of King of Belgium. On 4 June 1831, they chose Leopold Georg Christian Friedrich; Prince of Saxe-Coburg-Saalfeld, later Prince of Saxe-Coburg and Gotha, Duke of Saxony. Leopold was born on 16 December 1790 to Francis, Duke of Saxe-Coburg-Saalfeld, and Countess Augusta Reuss-Ebersdorf. On 26 June 1831, Leopold accepted the position of King of Belgium. On 21 July 1831, Leopold swore allegiance to the Belgian constitution and began his reign. On 2 August 1831, the Netherlands invaded Belgium. Sporadic fighting continued until 1839, when the Treaty of London was signed. Leopold reigned from 21 July 1831 until his death on 10 December 1865. Leopold I was the first of the Belgian line of the House of Saxe-Coburg-Gotha.

Leopold I enjoyed a distinguished military career. At the age of four or five Leopold was appointed Colonel of the Izmaylovsky Guards Regiment in Russia. He became a Major General seven years later. In 1806, he assumed a position with the Imperial Russian Calvary, and he fought against Napoleon I. When Leopold was 25, he was promoted to the rank of Lieutenant General in the Imperial Russian Army. Leopold’s enmity with Napoleon would have had resonance with his new Belgian subjects, for they courageously fought Napoleon and his imperial measures for years.

In 1832, Leopold married Louise-Marie of Orléans, daughter of King Louis Philippe of France. Leopold I was succeeded by a son of this union, Leopold II, in 1865.

Leopold I was the uncle of both Albert of Saxe-Coburg and Gotha and of Princess Victoria of England. He arranged their marriage, and he was one of Queen Victoria’s esteemed advisors.

SEEKING: THE YEAR IN WHICH THIS MEDAL WAS FIRST ISSUED.

The great majority of my account of Leopold I was derived from the Wikipedia article “Leopold I”. I hope that I haven’t plagiarized it in my exhaustion.

The description of the medal itself comes from a description written by Sir William Simpson, O.B.E., retired RAF Wing Commander and supplied in 2011, and from a webpage on Sir William’s “Bill’s Belgian Medals” website.

“Medal of the Outstanding Philanthropic Society of Former Soldiers (Militia and Voluntary) of Leopold I”, by Sir William Simpson, http://www.belgian-medals.com/ForSale7.html, accessed 31 Aug. 2012.