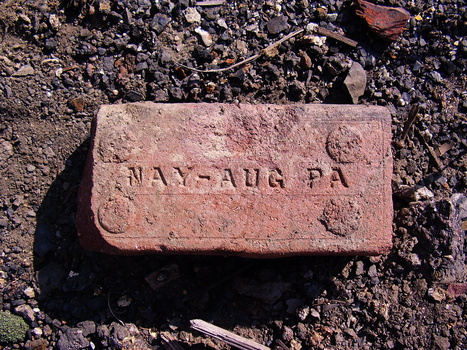 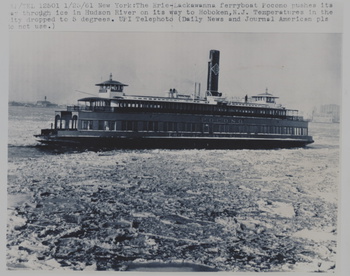 The first photo is of a brick from the demolished DL&W roundhouse in Kingston, PA. This one is marked "Nay Aug, Pa", and was used in half of the roundhouse, the other brick manufacturer "Kq" was used in the other half. The roundhouse was built in two sections, one with a cornerstone of 1917, and the other with one marking 1918.

Then we have a picture of a Lackawanna matchcover, which features a great design and simple, yet powerful graphics.

The third item is a Lackawanna passenger time table from September, 1950. Inside are the schedules, some interestingly noted as being "Diesel powered". Also included therein are nuggets on the line's sights for passengers, and data for business people to consider when needing a rail line.

The final picture is a UPI Telephoto from January 25, 1961 featuring the EL ferryboat "Pocono" crossing from Hoboken to NYC through the Hudson River ice.