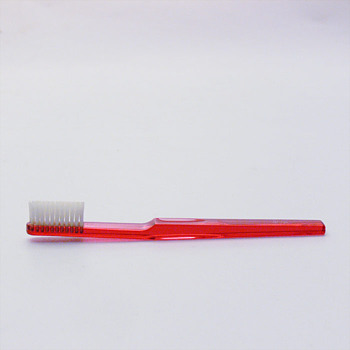 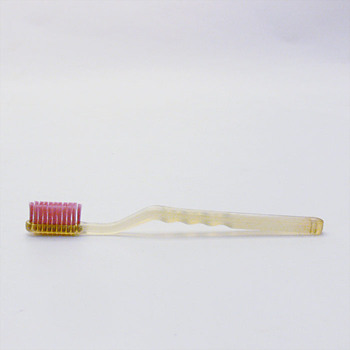 Ok, yes, I understand these two used tootbrushes may look a bit shocking here but... yes, they were designed by André Ricard and are least one of them is an amazing design.

The red one I bought some time in the mid 1980s... I remember I started to be "design concerned" at the moment, having started my studies in Art and so on. Well, I didn't choose it, not even the colour. It was given to me by my pharmacist, and I quite liked it when I saw it: those straight lines were pretty new at the time. Then I also enjoyed it as it was nice to handle... a really good toothbrush! Then I had to buy a new one but this I didn't throw away, so it spent "several" years in a glass mug my mother uses to keep old toothbrushes, those you never know who they belong to (we're four siblings plus my parents, which means lots of toothbrushes at home). I guess that it was five years ago I saw this toothbrush in a book about Ricard's work and I regreted not having kept mine... Once at my parents I thought "perhaps they still keep it" and looked at the mug and there it was!!! Woow! Who else has got something like that in his Ricard collection?

Sort of two years later I got another book on Spanish design and I saw another design for a toothbrush on the pages they dedicated to Ricard, not such a good design but still a Ricard's design I would like to have in my collection, so I thought "who knows, maybe I can find it at Mum's and Dad's too"... and of course, there it was!!! I don't know who used to own it but... he/she is family after all! LOL

I told you: Ricard designed almost anything!!!

I just found a second red aitbrush among my drawing stuff (I used it to spray watercolours, almost like a too primitive airbrush). This silly fact made me remember the story about it... I got the first one just by chance at the local pharmacy (the one we had a discount in because we were the doctor's family), and I loved the desgn and I guess I loved the brush in itself (these things happen... not all toothbruses are ok, aren't they?) So when this first one was worn out I went to the same pharmacy and bought another one that was just like it (even in the same color... I regret it now as I would have two brushes in different colours in my collection... :(grrrrrr).

Before I found this one I didn't remember having two of them, keeping the first one as an artist tool, buying a simmilar one... it's funny how unimportant objects such as this bring out memories we didn't know that existed at all.