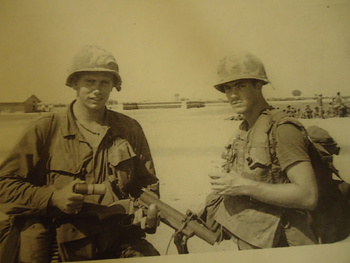 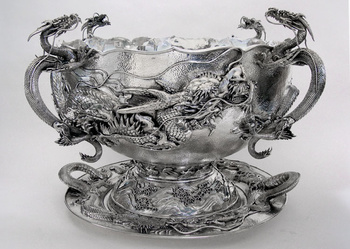 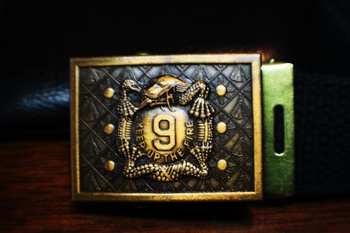 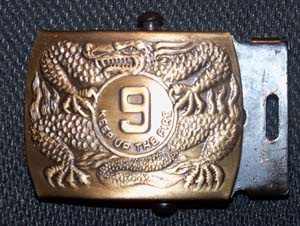 This is my unit from Vietnam, The bowl is from the Boxer Rebellion in China in I believe 1900. 7-8 countries sent troops I believe to stop China from becoming isolated from trade, the US sent my unit 9th Inf. 1200 men USA also sent about 30-50 Marines, Russia, Japan, Italy, Denmark, and other countries sent troops also, During the battle Colonel Liscum was mortally wounded but for hours yelled "Keep Up the Fire". After all was over The Chinese made this pure silver "Liscum Bowl"and we became Manchu's and "Keep Up the Fire" our motto. It weighs 92lb. and holds 14 gallons, I read awhile back it is worth 2.5 million. I once read an article that really the world wanted China open for trade for Opium? The first belt buckle is one I wear everyday! 2nd belt buckle is new! It is for us Vietnam model!! which I just recently received. It is 5-toed Imperial Dragon. I do not polish it as I do not want to wear off toe-nails on Dragon! Our unit was first to get to Custer's Last Stand, I guess we were late! Or might have come out different! I walked point and carried machete and compass and I was lost also! The photo is me and Michael "Frosty" Frost waiting to go to Cambodian border by helicopter, He was killed along with 48 other Manchus in 8 minute ambush on March 2 1968. Michael was a gentle caring human, but also was a good soldier, I really miss him. There is a book about the ambush "Unfortunate Sons" by L. D. James