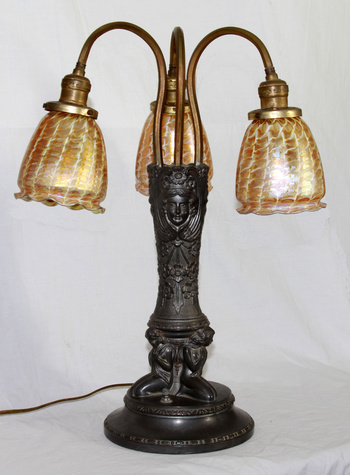 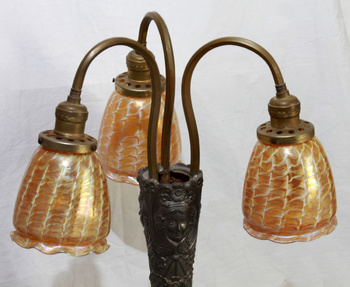 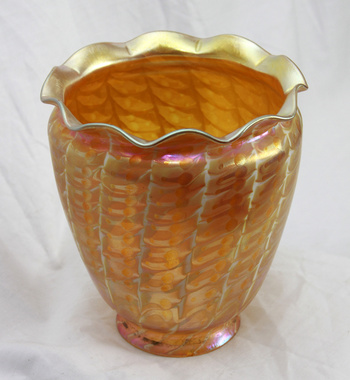 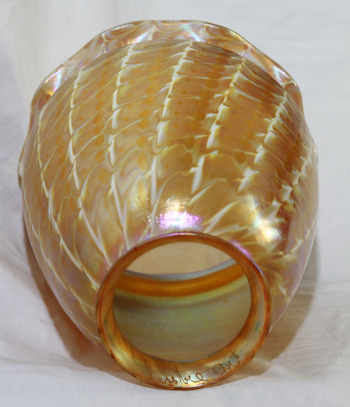 Years ago, soon after I started collecting art glass, I went into a shop in Northwood, New Hampshire, and found a very rare signed Lustre Art shade. I don't believe I had heard of Lustre Art at the time, nor did I know the connection of Conrad Vahlsing and Paul Frank (founded Lustre Art on Long Island, NY in 1920) to Quezal, but I recognized quality when I saw it. The shade had a beautiful hooked pulled-feather design, and had a funny little scratched-in signature that was a little hard to read. I soon found out what it was, and I was delighted to find that this glass was made where I grew up (Long Island). This is the sort of connection that often drives collectors on.

Fast-forward to this year. I have searched and searched for a replacement (I sold the original LA shade; it had chips to the fitter) and finally found this item on ebay. I was thrilled to learn that all three shades were SIGNED & PERFECT! Actually there is minor scratching to the inside of the fitters, but let's not quibble. As a bonus I even got somthing to display them on - the lamp is original (as far as I can tell - old Leviton sockets) but I don't think worth very much; but I got three perfect signed shades with it. And the shades! WOW!

Rumor has it they (Lustre Art) almost never signed anything, but I have four examples all signed (I also have a gold vase)- albeit in a similar scrawl but easy to read. So my research shows that they DID sign a fair portion. The unsigned ones are obviously harder to identify, and are almost certainly commonly mistaken for Quezal or Steuben. These are Long Islanders, just like me. Almost like family, huh?