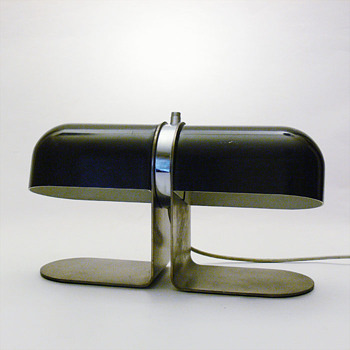 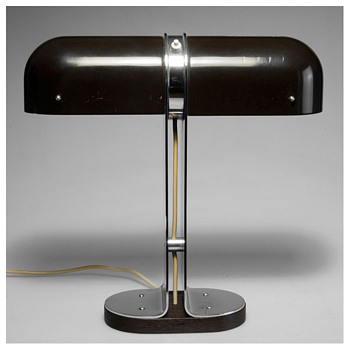 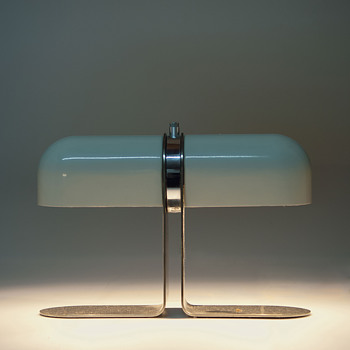 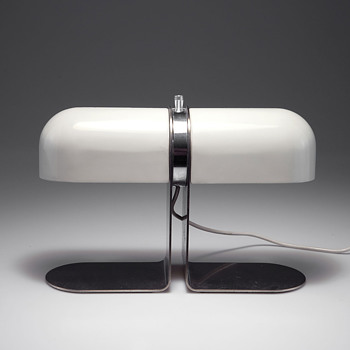 Here is another one of my André Ricard lamps. This time it's fully made of metal.

The tall one (which I haven't got... I wished!) was designed by Ricard for the reading room at the library of one of the Barcelona University colleges in 1973. The library was refurbished some years ago and I do believe most of them disappeared and just a few remain.

The shorter version I have may not be completely the design of Ricard. I'll try to explain why: I got mine with the original label and it says "Diseño: equipo Metalarte" (Designed by the Metalarte team), and as most of his designs are signed that makes me thing this could be something dome by Metalarte without his full consent. I know from Ricard himself that Metalarte used to design certain lamps departing from pieces he had previously designed (just like using one of his lamp screen designs with a lamp foor not designed by him).

But on the other hand it could really be his design... LOL And this I'll try to explain looking at the differences and simmilarities between the two of them...

B) differences:
1) the switch is different in this case, fully metal, but I think it's a much better design than the other one, which is a standard swith used in hundreds of lamps from the same time.
2) the foot is bigger in mine BUT looking at the two pieces of metal it comprises, it appears they're the same size in both cases, only they bend at different points (which I think it's a very clever thing).
3) My lamp is a normal desk lamp one can move from one point to another, but the tall one was designed for a library and my guess is that it was designed to be bolted to the desk. Which explains why the tall lamp has a wooden part at the bottom, which I think could have been added later to give stability to a freely standing lamp that has been actually designed to be bolted to a desk... Mine instead needs not to be bolted as its feet are big enough to stand pefectly.
4) In the big one there's this little union point which main function is keeping the cord under control. As my lamp is much shorter it has no need at all of such device.
5) something I don't really understand is the function of those two screws on the tall lamp's screen, which mine doesn't have.

By the way, I have got two more lamps by Ricard, or I'd rather say one and a half... The full-Ricard lamp is a wall lamp made out of metal with a glass screen, and the other one is the body of a Ricard lamp where someone fixed a different screen, but I simply couldn't help it and got it :) I don't have pics of them at the moment, but I'll share them as soon as I get them.