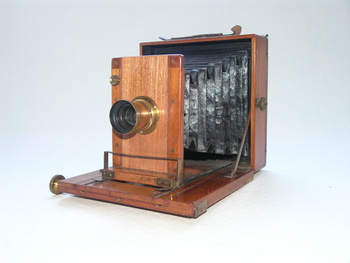 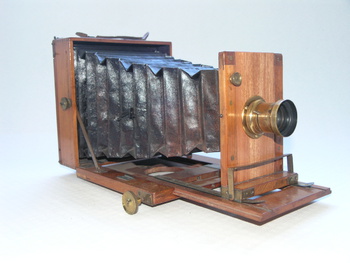 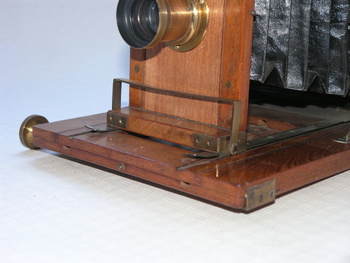 Levi, Jones & Co. Ltd. | Maker | Tivoli | 1897 | Field Camera | Half Plate.
Catalogue No. 0239. (Associated Retailer label, Richard Keene.).
Identifying these old cameras can require some research, and this is part of their fascination. The front panel of this camera is extended and locked by a quick release transverse locking bar in brass. This feature is unique to, and is typical of, cameras made by the above makers, though it does not carry their label. The firm was known as S J Levi & Co until 1897, when they adopted the above title. This double extension camera appears to be made of teak rather than mahogany. Although the camera bears Richard Keene's label, Keene did not make it, but he did commission cameras to retail under his label and an illustrated advert, from "Photography" of May 13th., 1897, verifies it as a Levi, Jones and Co. Ltd.'s "The Tivoli", available in four different "sets" priced from £3.7s.6d. to £4.2s.6d.. The only other camera I have seen with Keene's name was a Thornton-Pickard camera with both Keene's label and the Thornton-Pickard label attached.

Keene, Richard. | Retailer | Tivoli | Field Camera | 1897 | Half Plate.
Catalogue No. 0239. (For Maker, See Levi, Jones & Co. Ltd.).
Richard Keene, 1825-1894, was a highly regarded photographer in Derbyshire. In business in Derby from 1851 as Richard Keene & Co., printer, publisher and bookseller, his interest in photography led to it becoming the major part of his business as a professional photographer and photographic retailer. He was a founder member of the Derby Photographic Society in 1884, a member of The Linked Ring, an elite group of photographers whose fellow members included Frank Sutcliffe, famous Whitby photographer, and Keene photographed many leading figures of his day, including it is believed, royalty. This camera carries Keene's retail label.