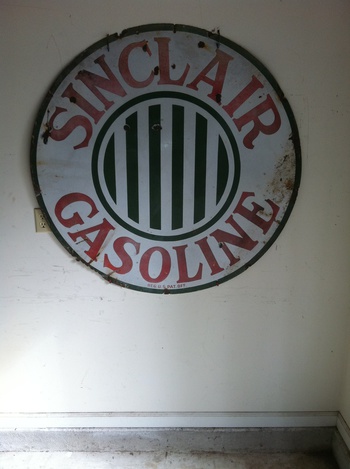 This is a local sign, picked by one of my buddy's who was at the right place at the right time. Got from a family who will not sell anything the guy's father was a distributor for Sinclair and they have tons of stuff, they had a station next to the house too, so they have pumps, signs, and who knows what else. The story goes my buddy was at his friends house and guess who his neighbor is,and they were having a little get together, drinks were consumed, conversations flowed and promises to sell were made. The next day when drinks wore off things went in favor of the buddy, but didn't get to view the full collection, instead he sold him four of these that were underneath some pine trees. I guess he felt obligated to sell something, and then quickly shooed him away.