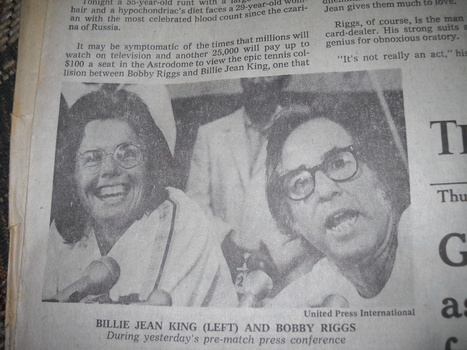 Probably one of the most disturbing pictures of a Indy or NASCAR crash captured in print, Danny Ongais crashed almost head-on into the wall, trying to make up lost time. The impact ripped the front of his car clean off, exposing his lower torso completely. He suffered severely broken feet and legs and needed the jaws of life to be removed from the car. The second photo is from the pre-match press conference with Billie Jean King and Bobby Riggs before their famous "Battle of the Sexes" tennis match. King beat Riggs convincingly.