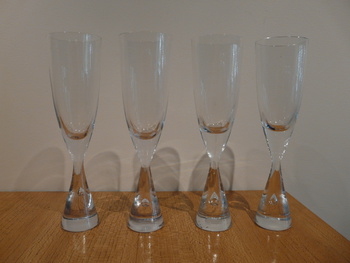 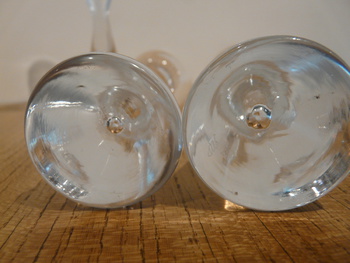 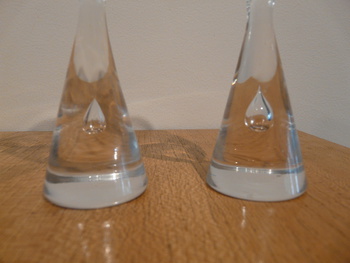 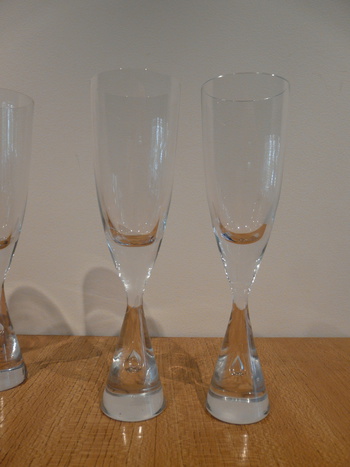 Last Monday I went out on my 'Northern Beaches Search Pattern' and came across four champagne glasses with those suspended bubbles that I have loved for the last forty-odd years. They were not cheap by Salvo's standards but they needed a new home. Holmegaard has been a passion for many years and it reflects the move towards Danish Modern here in Australia. The ultimate expression of that 'modernism' is the Sydney Opera House of course.

Colourless glass; mould blown. Champagne glass with tall bowl. Rim plain; wall curving in at bottom; tall, conical foot which is solid, with flat base and tear-shaped bubble at centre.

The Princess range was produced by Kastrup OG Holmegaard Glasverker A/S, Denmark from 1957 until 1995. A year later a similar modified form was released called "Prince". They were designed by Bent Ole Severin the Danish architect who designed hotels notably in Singapore and the Asia Pacific from 1972 and later he moved his design team to San Francisco. While researching this posting I realised that Bent Ole Severin had died earlier this year on June 4.

His daughter writes of him:
"My father, Bent Severin touched this world in so many ways. His legacy is his life’s work as an architect specialized in interior decoration of hotels. He designed more than 300 hotels worldwide. When the doctors couldn’t do more for him, he chose to leave this world and die gracefully at home, 86 years old and after a long and enriching life on three continents."