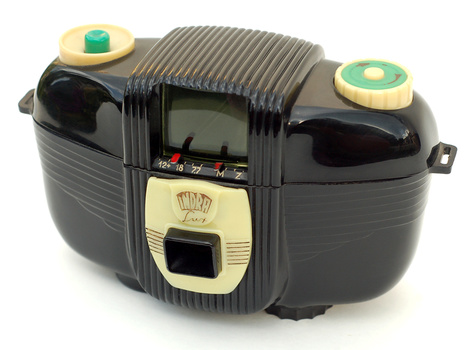 Manufactured in 1949, the Indra Lux is a plastic camera that was made in Germany by Indra-Camera G.m.b.H. It's got a fixed-focus 60mm/f7.7 lens and a large viewfinder which is tinted to simulate what you'd see on black & white film. Two feet on the bottom allow it to sit flat, but are also functional; the one on the left is home to the tripod socket, and the one on the right unscrews, revealing a storage compartment for a spare roll of 127 film. Unscrewing the foot/cap also allows the camera to be pulled apart. Of course, it's the design, not the features, that makes this camera one of my most prized.

The Indra Lux was advertised as being unbreakable, and the purchase price included a one-year warranty against breakage. Unfortunately, they were actually quite breakable, a fact that most likely contributed to the demise of Indra-Camera; apparently they were only in business for a few months.